The French Revolution continues to reverberate in the spirit of the French people today. Join Rick as he explores the lavish origins, violent conflict, and dubious aftermath of one of Europe's greatest upheavals.

14. Why was Neoclassicism the prevailing artistic and architectural style of the French Revolution? Which movement was the eventual reaction to Neoclassicism? How do the two styles differ?
15. How do you see monarchs and common people represented in the art in the Louvre? Who was the art originally intended for? Who sees it now? What story does it tell?
DISCUSS
16. How does the socioeconomic distribution of your country compare to that of France before the French Revolution? Who benefits in the current system, and who struggles? How stable is your country socioeconomically, and what could be done to make it more stable? Has anything similar to the French Revolution happened in your country’s history? Could you see something similar happening in your country’s future? Why or why not?
17. How were Louis XIV and Napoleon similar and how were they different? What were their respective legacies? Do you think that Napoleon succeeded in governing with the values of the French Revolution? Why or why not?
18. How has the French Revolution influenced your country? How do you see the values of the French Revolution—liberty, equality, and fraternity—promoted or suppressed in your nation? How are your government officials similar to or different from Louis XIV, Louis XVI, and Napoleon?
19. In the playlist, Rick uses the term “propaganda art.” What is propaganda art? What examples of propaganda art did you see in the playlist, and what were these works trying to communicate? Is there propaganda art in your community? What is it trying to accomplish?
20. What revolutions do you think will happen in the world in the next 100 years? Where will they happen, and why will they happen? How could geographical changes caused by climate change and technological advancements influence these revolutions? What will these future revolutions look like? What types of people will be on each side of the conflict?
CREATE
21. Imagine that your country has reinstated a modern monarchy, and you have been selected as the ruling monarch. Your goal is to convince everyone that you deserve this role and to maintain control over your people at all costs. Draw a blueprint of your royal residence, labeling the different spaces and what they would be used for. Also, draw at least one image showing how you would like to be depicted. Consider new technology and modern values as you make your plans. Finally, write a paragraph explaining why you designed your residence and your image in this way.
22. Imagine you are a revolutionary from the future fighting against a corrupt regime. Write a journal entry describing who you are, where and when you live, what regime you are fighting against, and what your vision for a more just society is. Include information about the goals of the revolution, the values you are fighting for, and the mantra of your fellow revolutionaries.
23. Imagine you are a PR consultant for Louis XVI. Prepare a presentation for Louis XVI and Marie Antoinette suggesting ways that they can prevent a violent revolution. Include information about what they should do with their property, what appearances they should make, what art they should commission, and where they should display it. Create a visual aid to use during your presentation.

CONTINUE LEARNING:
24. Watch Rick's special on Luther and the Protestant Reformation. Even though the Reformation occurred centuries before the French Revolution, what commonalities do you see between the two movements? What differences do you notice? What do these observations suggest about how politics and religion can intersect?
WA SOCIAL STUDIES LEARNING STANDARDS: C3.9-10.2, E4.11-12.3, G2.9-10.1, H1.9-10.2, H1.11-12.1, H2.9-10.1, H3.9-10.2 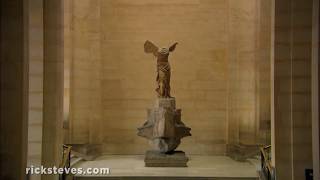