As a companion to Rick's television special "The Story of Fascism in Europe," please join Rick in an exploration of Communism in Europe by following along with this playlist.


3. How was Germany divided after WWII? Which parts of Germany were Capitalist and which parts were Communist?


4. Describe the statue Rick highlights in Leipzig, Germany. What does it symbolize?


5. How was Berlin divided during the Communist Era? What was used to divide the city? What was each half of the city like?


6. Who were the Stasi? How was East Germany guarded?


7. How did Communism vary between European nations? What were popular vacation destinations in Communist Europe, and why did people want to visit them?


8. What are the defining features of Communist art and sculpture? How do these styles capture Communist ideals or serve the goals of the Community Party?


10. Rick said that both Nazism and Communism celebrated a “sham justice and a sham democracy.” What does “sham” mean in this context?


11. Which countries are still Communist nations today? What do you hear about these countries in the news? Do you think that the news you read about these nations is accurate or is it biased somehow?


12. During Rick’s visit to Statue Park in Budapest, he visits controversial statues symbolizing Europe’s Communist past. What controversial symbols of the past do we have in the United States? What do you think should be done with these symbols?


14. Do you think that modern technology and social media have made it more or less difficult to create the types of regimes seen in 20th century Europe? What evidence do you see of this in the world today?


16. Imagine that you are a teenager living in East Berlin in the 1980s. Write a letter to your cousin living in West Berlin. Include details about your daily life in East Berlin, and ask them questions about their life on the other side of the wall. Consider what things would you be most curious to ask them.


17. Imagine you are in charge of dividing your state into two new states. Draw a map showing the two new states, and explain your reason for dividing the state this way. Then, write a brief statement explaining why your solution works well considering the people on each side and outlining what some possible consequences of the division may be.


18. Take a scene from your daily life—soccer practice, dinner with your family, orchestra rehearsal, etc.—and portray it as a Communist work of art. Make sure that your work of art promotes both Communist artistic style and Communist political ideals. Pay close attention to how you illustrate people, buildings, and natural world.


19. Watch Rick’s television special “The Story of Fascism in Europe." What are the similarities between fascism and Communism in 20th century Europe? What are the differences? 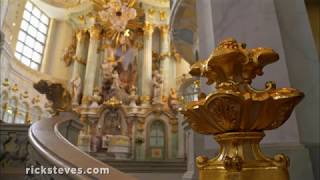 Dresden, Capital of Saxony, and Its Difficult 20th Century