Visit Amsterdam’s Rijksmuseum, which showcases the stars of the Dutch Golden Age: Rembrandt, Vermeer, and Jan Steen. Get an up-close look at Rembrandt's “Night Watch” and his insightful, realistic portraits.

Learn about Protestant Dutch art in Haarlem’s top museum featuring portrait artist Frans Hals. When the Netherlands broke away from Spain and the Catholic church in the 1600s, they became an independent Protestant republic. Dutch society was a merchant society, and artists like Frans Hals relied on merchants (rather than the Catholic Church) for commissions.

In Rotterdam, learn about the Dutch East India Company, which did business in ports around the world. Visit the Westfries Museum in the historic port of Hoorn and ponder the group portraits portraying these wealthy tycoons as they dominated world trade in the Dutch Golden Age. 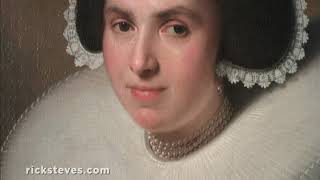