We're kicking off MNT 2022 with Swiss favorites — a fun mix of mountain thrills, traditional cow culture, and some actual yodeling from Rick (truly unforgettable…no matter how much you try to forget it). Stoke your winter travel dreams with a virtual swing through Switzerland's most exhilarating Alps as Rick takes us as high as you can mechanically get in Europe (a saddle high up on the Jungfrau) and shares a video visit to Zermatt and the Matterhorn that has never been broadcast. Along the way, we'll venture into a fascinating underground world of Swiss military power, check out the Birg Thrill Walk, and enjoy a buskers festival in Bern.

Watch this playlist along with Rick and hear his behind-the-scenes commentary HERE!


RESPOND
1. List three modes of transportation that Rick takes in the playlist. Why does Switzerland have so many different modes of transportation?
2. What is the Jungfrau in Switzerland, and what is the local story behind it? Why do you think there are stories for natural features like this?
3. What does Rick mean when he says that more people from “emerging economies” are traveling to Switzerland? What is an “emerging economy”? Why are people from these economies able to travel more now?
4. How are the effects of climate change visible in the Swiss Alps? What is an example that Rick gives in the playlist?
5. How has the local economy in Gimmelwald changed over the past century? What was the primary industry in the past, and what is the primary industry now?

6. How did Switzerland brace for World War II, and how did it use its geography to its advantage? Provide an example from the playlist.
7. What is the Festung Fürigen? What two threats throughout history was it prepared to defend against? Was it successful in this defense?
8. What is a canton? What would be its equivalent in the United States?
9. What was the town of Zermatt designed for? What aspects of its infrastructure prove this?
10. How did the wooden houses in Zermatt survive for hundreds of years? And what design feature did they add to the storehouses to keep rats out? What is a design feature typical of buildings in your area that is included to combat natural elements?

DISCUSS
11. How does the geography of a region affect the culture there? What are examples of ways that Switzerland’s geography impacts its public transportation, economy, and national identity? In what ways does the geography in your region affect the culture you live in?
12. How connected do you think the people in the Swiss Alps feel to the natural world around them? What evidence of this do you see in the playlist? Do you think that they feel more or less connected to the natural world than people in your community? Do you think that this connection to nature is beneficial or not? What changes could be made in your community to create a healthier relationship between the population and the natural world?
13. What is yodeling? What does it communicate? Why does Amadé consider it the fifth language of Switzerland? What similarities and difference does it share with languages like English, French, and Italian? Do you think it should be considered a language? Why or why not?
14. Switzerland has four official languages: German, French, Italian, and Romansch. How do you think this multilingual reality came to be? What are the benefits and what are the drawbacks of having multiple official languages? There has long been a debate in the United States regarding whether the United States should declare English the official language of the country. Why might people argue for this and why might people argue against it? What is your opinion and why?
15. Why does Rick say that Switzerland is famous for its neutrality? What is neutrality, and what is an example of Switzerland’s neutrality from history? What are the advantages and disadvantages of taking a neutral stance? What are examples from United States history when the United States did or did not remain neutral? Do you feel the country chose correctly? Why or why not? Finally, what types of global conflicts should the United States remain neutral for and which should it get involved in in the future?

CREATE
16. Imagine that you grew up in a village high in the Swiss Alps. Now imagine that you’ve just moved to a large city to go to a university there. Write a journal entry expressing your thoughts on the big city, how it differs from your upbringing, and what you do or don’t miss about home. Finish by writing about your plans for the future once you graduate university. Will you move back to your village or no?
17. Imagine that you are preparing the region where you live for a potential enemy invasion. Identify who your enemy is, the technology they have at their disposal, and the tactics they are likely to use when invading. Then, use this information to determine ways to prepare your region for the invasion. Decide which technologies you will use and how you will implement them. Include at least on instance of using the geography or your region to your advantage. Create an illustration or diagram of your defense strategy.
18. You have been hired by the Swiss village of Gimmelwald to consult them on how to bolster their local economy. Farming is not as profitable as it used to be, and they are trying to determine how to attract more tourism without sacrificing their traditions and the distinctive atmosphere of their little village. Create a strategy for the village of Gimmelwald to increase tourism while retaining its character. Create a presentation complete with visuals outlining your strategy to village leadership.
19. Choose a natural feature that is important to the people in your region. Create an origin story for this feature similar to the traditional Swiss story of the Jungfrau. Create a children’s book for this story complete with text and illustrations.

CONTINUE LEARNING
20. Watch Rick’s TV show on “Switzerland’s Great Cities.” How does life in the cities of Switzerland differ from life in the mountains? Where would you prefer to live in Switzerland and why? 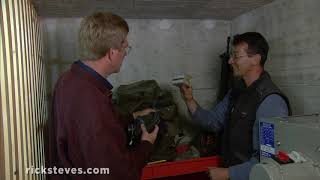 Switzerland’s Military, Hiding in the Mountains