The Rijksmuseum showcases the stars of the Dutch Golden Age: Rembrandt, known for his insightful and realistic portraits; Vermeer, who captured the beauty of everyday things; and Jan Steen, who painted fun slice-of-17th-century-life family scenes.

Amsterdam’s Rijksmuseum is one of the artistic highlights of Europe. It was built to showcase the art of the Dutch Golden Age. Here we can gain insight into the industrious people who made tiny Holland so prosperous and powerful back in the 17th century.

This art is really all about money. The Dutch worked hard, they were brilliant traders, and the wealthy had plenty of money to match their egos. Now, painters earned their living working not for the Church or the king, but by painting portraits for local big shots.

The great Dutch painter Rembrandt — this is a self-portrait at age 22 — earned his money painting portraits.

These Dutch “masters — actually the drapers’ guild — all paid equally and expected to be portrayed equally. Wearing the standard power suit of the day, it’s as if someone walks in and grabs their attention — natural as a snapshot.

In Rembrandt’s Nightwatch we see another group portrait. But, rather than the standard stiff pose, this one bursts with energy. It’s the local militia, which was also a fraternity of business bigwigs — a kind of Rotary Club of the 17th century. They tumble out of their hall, weapons drawn, ready to defend the city. While creative and ground-breaking in its composition, some of those who paid the artist — like this guy — were probably none too pleased.

This self-portrait of Rembrandt at age 55 shows a man who’s seen it all and woven those experiences into his art.

Rembrandt did more than paint for big egos. In this painting, the prophet Jeremiah laments the destruction of Jerusalem. He slumps in defeat, confused and despondent. Rembrandt’s use of light to highlight certain details set him apart from other artists of his age.

The Rijksmuseum has four rare and precious paintings by Johannes Vermeer. Here the master of tranquility and stillness shows an intimate street from his hometown of Delft. In this quiet painting of an ordinary milkmaid, Vermeer — who brings out the beauty of everyday things — creates a scene where we can almost hear the trickle of the pouring milk.

Perhaps for the first time, art catered to the tastes and budgets of middle-class people too. Smaller canvases by no-name artists that a regular merchant could afford and hang in his living room.

The work of Jan Steen offers a delightful slice of 17th-century Dutch life. No preachy religious or political themes. Just light entertainment, with a dose of folk wisdom. Here, children teach a cat to dance — mischief on their delighted faces — but their father’s upset that they’re wasting time. And in Steen’s Merry Family, the parents party while their kids copy their irresponsible behavior: The girls learn to drink and the little boy picks up smoking. The note warns, “Parents beware; your children are learning from your bad behavior.” 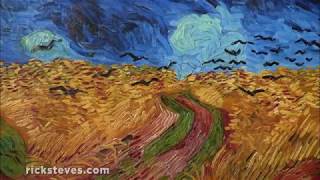