Epidavros, the best-preserved theater of the ancient world, provided entertainment for people seeking cures at its hospital complex (now gone). Known for its excellent acoustics, the theater is used as an arts venue today.

An hour's drive east is the sanctuary at Epidavros, with the best-preserved theater in the ancient world and the scant remains of its city.

In 400 BC, Epidavros, with a sprawling complex of hospitals and sick wards, was the most famous healing center in the Greek world.

It was a place of miraculous cures — and comfortable benches, where the sick came to be treated by doctor-priests doing the work of Asklepios, the Greek god of medicine.

The highlight of Epidavros is its fine theater, which provided entertainment for those who made the pilgrimage here from all over Greece. It continued to operate until AD 426, when Emperor Theodosius II — who was a Christian — closed it down, along with all other pagan sanctuaries. Given its size — over 12,000 seats — and obvious lack of modern amplification, the acoustics needed to be perfect…and they still are.

Rick: Friends, Greeks, wayfarers, in these times of discord, fear is rampant in our society. I contend that the flip side of fear is understanding…and those who travel will reap great understanding — by meeting people who find other truths to be self-evident and God-given… 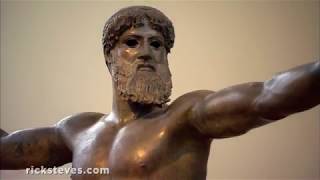