Ireland’s leading archaeological site is two ancient burial mounds, Newgrange and Knowth, dating back 5,000 years. Aligned with the rising sun, they were sacred then and are mysterious now.

The most popular sightseeing attraction near Dublin is Bru na Boinne, an archaeological site with two amazing ancient burial mounds. Upon arrival, visitors get appointments to tour the tombs, spend waiting time in the state-of-the-art museum, then catch their shuttle bus to one or both of the 5,000-year-old passage tombs — Newgrange and Knowth.

Knowth is a necropolis — or city of the dead — with several grassy mounds around one grand tomb. Being a passage tomb, it has a tunnel facing east and one facing west — aligned so that on both the spring and fall equinoxes, rays from the rising and setting sun shine down the passageways, illuminating its central chamber.

Guide: To give you an idea of the sweep of the history here, these sites were built approximately 5,300 years ago — approximately 3300 BC — which puts them 500 years older than the oldest pyramids in Egypt, 1,000 years older than Stonehenge in Wiltshire in England. So these people put a huge amount of energy and resources, and basically a huge amount of their wealth, into constructing these monuments. They were probably thinking not just about survival but issues around life, death — the story of their tribe, the story of their ancestors, issues like rebirth, where did they come from, where were they going to.

Another shuttle bus ride drops us at the Newgrange tomb — thought to be even older, dating from 3,200 B.C. While we know almost nothing of the builders, this was most certainly a sacred spot dealing with some kind of sun god ritual. Imagine the impact of this place — the largest structure ever seen faced with exotic white quartz…

Guide: The farming people who constructed these monuments, these passage tombs, must have been the original hunting/gathering people of this country who came here after the ice melted. This abstract art appeared with them in tandem with farming as if it was a symbolic language — something to do with their psychological and religious needs.

Your guide actually takes you deep into the tomb — down a narrow passageway, which leads to the cross-shaped central chamber under a 20-foot-high igloo-type stone dome.

Bones and ashes were placed here under 200,000 tons of stone and dirt to wait for a special moment. Here, in a replica of the tomb, back in the museum, your guide turns out the light and the sunray ritual is demonstrated: As the sun rises on the shortest day of the year, a ray of light shines into the passageway. For 17 minutes it lights the center of the sacred chamber.

Perhaps this was the moment when the souls of the dead would be transported to the afterlife via that mysterious ray of life-giving and life-taking sunlight. 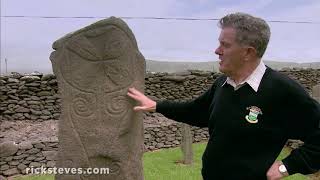 Prehistoric and Medieval Ireland on the Dingle Peninsula 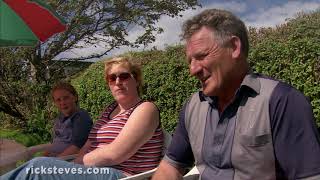