The magnificent Pantheon is the best-preserved temple from ancient Rome. Perfectly proportioned and topped with a dome, it’s been in continuous use for 2,000 years — serving as a pagan temple dedicated to all gods (pan + theon = all gods) and now as a Christian church.

Surviving bits of the ancient empire are everywhere you look. Important squares are still marked by towering columns. Medieval Romans built with scavenged fragments of once grand buildings. Obelisks shipped from Egypt 2000 years ago still stand like exclamation points. And peel up any street or square — this is a republican era temple-and you’ll find stony remnants of Rome’s grand past, standing right next to its modern present.

Throughout the ages, people mined once glorious buildings as quarries. Imagine, they were stacked with pre-cut stones, free for the taking. Block by block, they carted away most of this temple and then incorporated what was still standing — like these columns — into a modern building.

Thankfully no one cannibalized the magnificent Pantheon, the best-preserved temple from ancient Rome. The portico with its stately pediment has symbolized Roman greatness ever since antiquity. Like the obelisks, its massive one piece granite columns were shipped from Egypt. They’re huge. It takes four tourists to hug one.

Step inside to enjoy the finest look anywhere at the splendor of ancient Rome. Its dimensions are classic — based on a perfect circle — as wide as it is tall…140 feet. The oculus is the only source of light. The Pantheon survived so well because it's been in continuous use for over 2000 years. It went almost directly from being a pagan temple to being a Christian church.

The beauty of the Pantheon and the brilliance of its construction has inspired architects through the ages. The dome is made of poured concrete which gets thinner and lighter with height — the highest part is made with pumice, an airy volcanic stone. Pan…theon means "all gods." It was a spiritual menagerie where the many gods of the empire were worshipped.

There was a kind of religious freedom back then. If you were conquered you could keep your own gods…as long as they worshipped Caesar too. This was generally no problem. But the Christians who had a single…and very jealous…God were an exception. Because they refused to worship the emperor, early Christians were persecuted.

The Ancient Colosseum in Rome 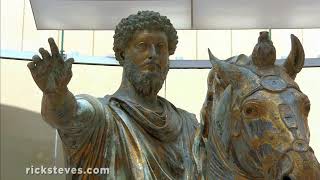