A visit to Auschwitz — a former death camp for Jews and other "undesirables," and now a memorial — shows you the cellblocks, artifacts, gas chambers, and crematorium. The mission of the memorial: that we learn from history.

But the most powerful Holocaust memorial — I think in all of Europe — is the concentration camp here at Auschwitz, an hour’s drive from Kraków.

Auschwitz was the biggest and most notorious concentration camp in the Nazi system. Seeing the camp can be difficult. But Auschwitz victims and their families want tourists to come here, to experience the scale and the monstrosity of the place in human terms, in hope that the Holocaust will never be forgotten.

The Nazis turned this army base into a death camp. They murdered over 4 million European Jews in Poland. Over a million people — the vast majority of them Jews — were systematically exterminated here at Auschwitz. The notorious gate welcomed inmates with a cruel lie: Arbeit Macht Frei…work will set you free.

Former cellblocks tell the story. People were told they’d be starting new lives and to bring luggage — clearly labeled with their names. After they were killed, everything of value was sorted and warehoused. Eyeglasses evoke how individuality was trashed. Crutches and prosthetic limbs remind us that the first people exterminated were mentally and physically ill German citizens; children’s clothing — the Nazis spared no one — and a seemingly endless mountain of shoes…it’s hard to comprehend the numbers.

Halls are lined with photographs of victims, each marked with dates of arrival and dates of death — inmates rarely survived more than a couple of months.

The crematorium is marked by its chimney. Up to 700 people at a time could be gassed, but it required two days to burn that many bodies here. The Nazis didn’t like this inefficiency, so they built a far bigger camp two miles away.

Auschwitz II, or Birkenau, was a vast factory of death holding 100,000 people. A few buildings survive. Train tracks lead efficiently past the main building, into the camp, and to the dividing platform.

A Nazi doctor stood here and evaluated each prisoner as they stepped off the train. If he pointed to the right, the prisoner marched — unknowingly — directly to the gas chamber. If he pointed to the left, the person was judged strong enough to work and would live a little longer. It was here that families from all over Europe were torn apart forever.

Up to a thousand were packed into each of these buildings. Each inmate had an ID number, a barrack number, and a bed number. Two chimneys connected by a brick duct provided a little heat.

The bricks are worn smooth by countless inmates who sat here to catch a little warmth in the middle of a bitter Polish winter. I can’t imagine how cold they must have been…wet, hungry, and dressed in rags.

The Germans bombed the sprawling gassing and cremation facilities as they retreated. The ruins stand as a memorial.

The gas chambers — where the mass killing was done — were disguised as showers. People were given hooks to hang their clothes on, conned into thinking they were coming back. (The Nazis didn’t want a panic.) Then the inmates piled into the ”shower room.” At Birkenau the Nazis gassed and cremated over 4,000 people per day.

The camp monument represents gravestones and the chimney of a crematorium. Plaques — in each of the languages spoken by camp victims — explain the purpose of this memorial.

The memorial reads, “a cry of despair and a warning to humanity.” Since liberation day in 1945, millions have visited this place. Hopefully they take away a determination to learn from the holocaust, and never let it be repeated. 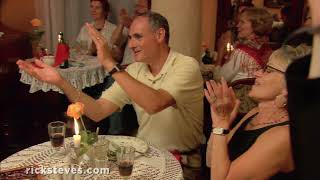 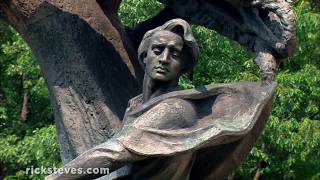