Barcelona’s excellent Picasso Museum contains the world’s best collection of the precocious artist’s early work. After mastering realism as a teen, he let his creative genius loose to discover new forms of abstract art, which the museum also displays.

And nearby, filling five grand old mansions, is a highlight for many visiting Barcelona: the Picasso Museum.

Since Pablo Picasso spent his formative teenage years here in Barcelona, this is the best collection of his early art anywhere. By seeing his youthful, realistic art, it’s easier to appreciate his artistic genius and his later, abstract art.

The museum lets you trace the evolution of Picasso's work right back his school-boy days. Pablo's earliest art is realistic and serious. Even as a 14-year-old, his portraits of grizzled peasants show impressive technique and psychological insight. He painted his first teacher — who happened to be his father. In this portrait of his mother, Picasso works on the expression in her cameo-like face.

At art-school he captured the human anatomy brilliantly. During these years Pablo learned the rules he would later so expertly break. His self-portraits show the self-awareness of a blossoming intellect…a kid who, I imagine, was a handfull in junior high school.

As a 15-year-old, Pablo dutifully entered art-school competitions. This was his debut work — the First Communion. While a religious subject, it's more an excuse to paint his family. Notice his sister's exquisitely painted veil.

In Science and Charity, Picasso, still just a teenager, conveys real feeling. The doctor, Pablo's father again, represents science. The nun represents charity and religion. Judging by her hopeless face and the lifeless hand, it seems Pablo wants to show that death is inevitable.

In his early 20s Picasso went to turn-of-the-century Paris — a city filled with light and life and love. He went bohemian — made friends with prostitutes, poets, and other artists.

He dabbled in different styles and was inspired by the leading artists of the age. He painted Impressionist landscapes like Monet, posters like Toulouse-Lautrec, still-lifes like Cézanne, and garishly colored Fauvist works like Henri Matisse.

But later, the suicide of his best friend and his own poverty lead Picasso to his Blue Period. He produced lots of blue paintings… which matched his mood.

By this point Picasso has developed a distinct style of his own — painting not what he sees but what he feels. Despair, a touching portrait of a mother and child, captures the period well.

Eventually emerging from his blues, Picasso enjoyed a long, innovative, and prolific career as a mature artist freed from boring realism and the constraints of convention.

All his life, Picasso said, "Paintings are like windows open to the world." These canvases, painted when the artist was in his 80s, show the joys of the sun-splashed French Riviera. To the end, Picasso continued exploring and loving life through his art. As a child, he was taught to paint as an adult. And as an old man, he declared he had learned to paint like a child. 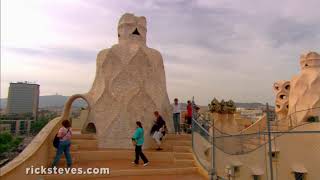 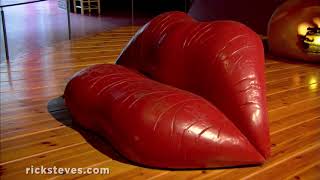