Portugal led Europe 500 years ago in the Age of Discovery. With its global trade routes came easy money which funded a cultural boom. The "Manueline" architecture of the day, named for King Manueline I, is best seen in the grand church surrounding the tomb of Vasco da Gama.

Like industrial harbor fronts all across Europe, Lisbon’s has recently been transformed into a people-friendly waterfront promenade. And from here, a trolley takes us farther along the waterfront to the district of Belém.

Belém survived the big earthquake of 1755. Because of that, great buildings from Lisbon’s pre-earthquake glory days, like the Belém Tower, still stand.

Back then, this tower protected Lisbon’s harbor. Today, it symbolizes the voyages that made Portugal so powerful five centuries ago. This was the last sight sailors saw as they headed out into the unknown, and the first they saw when they returned, bearing gold and spices.

The nearby Monument to the Discoveries — built in 1960, on the 500th anniversary of Henry the Navigator’s death — is shaped like the ship that made it all possible…the caravel. It celebrates how exploring the world was a team effort.

Leading the charge is Prince Henry the Navigator, holding a model of his ship and a chart, followed by kneeling knights and soldiers who Christianized foreign lands with the sword. Vasco da Gama stands tall — eyes on the horizon and hand on his weapon. Magellan holds a circle, representing the earth his ship famously circumnavigated.

Across the way is a naval museum, which shows how this little country once built a mighty empire. Exhibits show the technology that Portugal used to become a leader in exploration and trade in the 15th and 16th centuries.

The caravel, the ultimate ship for exploring and trading, was Portugal’s secret to success. It was fast, small, and light, with sails that could pivot quickly. Nimble and able to sail into the wind, it was ideal for sailing along coastlines. The Portuguese became experts at navigating by the stars. With ingenious tools like these, they could now sail away from the coast. Equipped with this technology and his caravel, Vasco da Gama sailed around Africa to India.

Portugal’s mastery of the sea had a huge impact. Throughout the Middle Ages, Italy dominated European trade with the East. But, within 10 years of Vasco da Gama’s voyage around Africa to India, Italy’s trade plummeted. And the seafaring nations on the Atlantic coast — England, Holland, Spain, and Portugal — emerged as Europe’s economic powerhouses.

Next to the museum is the Jerónimos Monastery, with Lisbon’s most impressive church. King Manuel ruled during Portugal’s Age of Discovery, around the year 1500. He built this church and monastery as a thanks to God for the trade and wealth that resulted.

Manuel financed the construction by taxing spices brought back from Asia. He built all of this on the site of a humble chapel, where seafarers prayed before leaving on their frightening voyages. The style of Manuel’s church? “Manueline.”

This style, while medieval, is on the cusp of the Renaissance. Unlike earlier medieval churches, the interior is open and airy. Palm-tree-like columns are slender rather than massive. This uniquely Portuguese style reflects the wealth of the times, and the many cultural influences of that age.

Manueline decoration is both ornate and symbolic, featuring motifs from the sea: Monsters evoke the mystery of undiscovered lands, a totem pole of indigenous faces celebrates Portuguese conquests, and the ceiling — a Boy Scout handbook of knots — trumpets Portugal’s nautical know-how.

This is Vasco da Gama’s tomb. In 1497, he spent an evening praying here for a safe voyage. The next morning, he set sail with four state-of-the-art caravels like this — and 150 men.

These lacy Manueline cloisters — my favorite in all of Europe — are the architectural highlight of Belém. The sheer size of this monastic complex is a testament to the religious zeal that — along with money — propelled the Age of Discovery. 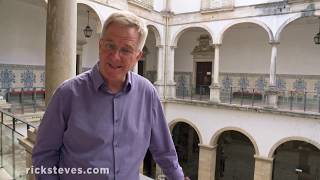