Carcassonne, Cathars, and the Inquisition in Southern France
Share

The walled town of Carcassonne provides a textbook lesson on 13th-century defensive fortifications. The region was home to the Cathars — a heretical group of Christians — until they were wiped out by a zero-tolerance pope and the French.

A short drive south from the Dordogne takes us into the region of Languedoc.

This region's hard-fought past and independent spirit is evident in its old fortifications, fine art, and in a culture distinct from the rest of France that survives to this day.

The fortress city of Carcassonne is a 13th century world of towers, turrets, and cobblestone alleys. This is Europe's ultimate walled fortress city. While it's packed with tourists mid-day, it's all yours and evocative as can be early and late.

The city's stern ramparts evoke a time when defenses were stronger than offenses… and the only way to beat a place like this was a starve 'em out siege. Charlemagne laid siege to this place… and after several frustrating years, he ran out of patience.

While the outer ramparts seem mighty enough, moats added to a fortified city's defenses. While not really filled with water and alligators, moats were generally just a dangerous no man's land designed to expose attackers. Small square holes on the inner wall once supported timbers which supported defensive walk ways.

Modern shops fill buildings that date from Carcassonne's golden age — the 1100s, when troubadours sang ballads of ideal love, chivalry was in vogue, and a pragmatic spirit of tolerance pervaded everything.

This became a center of the Cathars — a heretical group of Christians who thrived around here from the 11th through the 13th centuries. They saw life as a battle between good (the spiritual) and bad (the material). To the Cathars material things were evil and of the devil. As France was working to consolidate its central power, it clamped down on feisty regions like this… especially if they were sympathetic to heretical groups like the Cathars.

The region is dotted with evocative and remote castle ruins which provided places of desperate last refuge for Cathars and remind of bloody struggles. When driven out of Carcassonne, many Cathars hid in the nearby castles of Lastours.

Back in Paris, the king wanted to tighten his grip on southern France. In Rome the pope needed to make it clear there was only one acceptable form of Christianity and it was Roman. Both found self-serving reasons to wage a genocidal war against the Cathar people, who never amounted to more than 10 percent of the local population. After a terrible period of torture and mass burnings, the Cathars were wiped out. In 1321 the last Cathar was burned.

The Cathars were also called Albigensians — named after this nearby town, Albi. Its massive Roman Catholic cathedral was the final nail in the Cathar coffin. Big and bold, it made the Church's zero tolerance policy towards heretical thinking perfectly clear. The cathedral looks less like a church and more like a fortress — on purpose.

The interior looks essentially as it did in 1500 — and its art comes with a stern message. In the Last Judgment Painting, the dead come out of the ground with an accounting of their deeds, both good and bad, printed in ledgers on their chests. The saved look confident and comfortable. And those whose ledgers don't add up look pretty nervous. A wide selection of gruesome punishments awaits the sinners. These graphic scenes were designed to frighten wide-eyed parishioners into conformity with Church dictates. 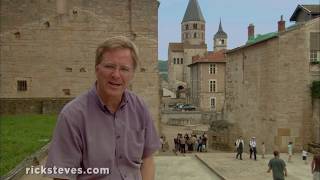 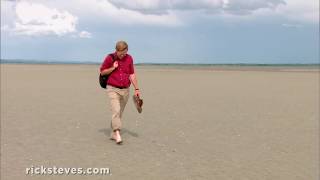