The Czech town of Český Krumlov, which flourished in the 16th century, has a mighty castle that shows us how the nobility lived, dined royally, partied in style, and were entertained by melodramas in their resplendent Baroque theater.

With the natural moat provided by the Vltava River, it’s no wonder this place has been a choice spot for ages. The 16th century was the town’s Golden Age, when Český Krumlov was a cultural power hosting artists, scientists, and alchemists from all over Europe.

The town’s many tourists set their sights on the mighty castle of the Rožmberk family. For three centuries — until about 1600 — the Rožmberks — Bohemia’s top noble family — ran the city from this perch. Its 16th-century Renaissance paint job is fancifully restored.

Visitors wait their appointed time for a tour in the castle courtyard. The interior gives a glimpse of the ultimate in Bohemian noble living through the ages. Imagine being a guest — back in the 16th century — of this man, Count Rožmberk. You’d enjoy the scenes frescoed here which celebrate a Rožmberk family wedding. Then, riding his assembly line of fine living, you’d dine here. Come back two centuries later, and you’d dine here. And if the countess tired of your company, she’d retire to her adjacent bedroom… but only after a servant lit the candles on her Meissen porcelain chandelier.

And of course, the party would go on… perhaps with a Venetian-style masquerade party in the ballroom. For a little fresh air, you’d hike down this corridor, 150 yards, to the count’s formal garden. But don’t forget: At 8pm, the candles would be lit… for a play in the Baroque theater.

Europe once had several hundred fine Baroque theaters like this. Using candles and oil lamps for light, and pyrotechnics for special effects, eventually most of them burned down. Today only four survive that are in beautiful shape and open to the public like this one here, at Krumlov Castle.

Baroque theater was all about melodrama — lighting, perspective, and sound effects were all melodramatic. Even the weather was thrilling — with machines to make horrifying wind… a driving rain storm… and menacing thunder. Even back then, it was all about special effects. 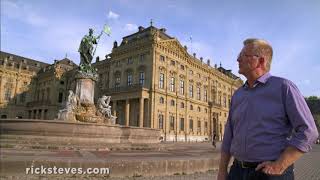