Copenhagen boasts the modern district of Christianshavn, while it tolerates the scruffy commune of Christiania, where hippies enjoy a do-your-own-thing freedom. We visit Tivoli Gardens, a very Danish amusement park.

Copenhagen is a thriving commercial center, and the economy is greased by a fine public-transit system. Their metro is state of the art, tunneling under water to connect major neighborhoods. The Danes vote for high taxes with high expectations — including a transportation system that works.

We emerge in the charming district of Christianshavn, once Copenhagen's port. Back in the 17th and 18th centuries, these buildings were warehouses. This remained Copenhagen's commercial center until the 1920s when a modern harbor was built further out. As the port's economy collapsed, the place became a slum. Cheap prices attracted artsy types, it became trendy, and now those old warehouses are up market condos.

The centerpiece of Christianshavn is Our Savior's Church — with its beloved steeple… a landmark that can be seen from all over town. Its unique exterior spiral staircase rewards those who climb it with commanding views of the city.

Just down the street is the famous commune, Christiania. In 1971, several hundred squatters took over an abandoned military barracks and attempted to create their own utopia. Two generations later, those idealists are still here, defending their right to enjoy life on their terms.

Back then, city officials allowed the squatters' take-over because no one cared about the land. Now, this area is becoming some of the priciest real estate in town. Developers have their sights set on this land and the very existence of the Christiania community is threatened.

Depending on your perspective, this is either a shanty town of scruffy buildings, soft drugs, and dazed people… or a do-your-own-thing haven of creativity, peace and freedom. While the main drag — nicknamed Pusher Street for its marijuana stalls — may be a bit off putting, wander deeper into the community and you find the real soul of Christiania.

This family has been content to live on this idyllic spot for 30 years — their daughter was born and raised right here. Many families share this building — and there's always someone to play with just outside the front door.

Rick: How long have you lived in Christiania?
Resident: I lived in Christiania 15 years.
Rick: Now you could live in a fancy condominium, but you choose to live here. Why do you live here?
Resident: Because I have an enormous freedom.
Rick: It’s all about freedom?
Resident: Yes. It is.
Rick: So we look at here we have 800 people living here making some compromises but still being free.
Resident: Yes exactly.
Rick: A complicated challenge.
Resident: It is and we have a, we have our bad experience and good experience so, but the good thing about it that we, we learn.

After four decades the Christiana community has evolved, but it is still anchored in its original concept of personal freedom.

Even in this informal community there still are rules. While marijuana is tolerated no hard drugs or weapons are allowed.

Resident: It’s so important for a playground also for grownups.

Copenhagen offers playgrounds for every taste. Tivoli is Europe's most famous amusement park. Throughout the summer, Tivoli Gardens offers a festival of entertainment — 20 acres, 100,000 lanterns, and countless calories of fun. It's a joy to get lost in this wonderland of rides, restaurants, and games.

Upon arrival, sort through the schedule of free events. There's something for everyone all day long. Tonight, it's rock out Friday — a chance to check out some rising Danish talent… 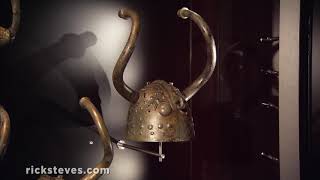