While Mykonos is jammed with hedonistic tourists, just across its harbor is Delos, a tiny island with a huge history. Once one of the busiest ports and holiest places in the ancient world, Delos has fascinating ruins to explore and an enticing summit to climb.

Along with its beaches, Mykonos offers a major historic attraction. It’s on an uninhabited neighboring island, a 30-minute shuttle-boat ride away.

The island of Delos was one of the most important places in the ancient Greek world, with temples honoring the birthplace of the twin gods Apollo and Artemis. Centuries before Christ, Delos attracted pilgrims from across the Western world.

Delos was important in three different ancient eras: first as a religious site, then as the treasury of the Athenian League — that was sort of the “Fort Knox” of the ancient world. And later, during Roman times, this was one of the busiest commercial ports in the entire Mediterranean. Delos ranked right up there with Olympia, Athens, and Delphi.

Survey the remains of the ancient harbor: foundations of shops and homes, and hillsides littered with temple remains. The iconic row of sphinx-like lions still heralds the importance of the place. This was one of the Aegean world’s finest cities.

Imagine Delos in its heyday — a booming center of trade: streets lined with 3,000 shops where you could buy just about anything. Dazzling mansions of wealthy merchants with colonnaded inner courtyards. There were fine mosaics — like this one of the god Dionysus riding a panther. Culture thrived here, enough to keep this theater — which could seat 6,000 — busy.

Innovative cisterns collected rain water — these round arches date from the third century BC. Plumbing ran under the streets, and water was plentiful. Local guides demonstrate still-working wells.

Antonis: …one of the 200 wells and cisterns in the city, fresh, drinkable water from the rich aquifer underneath us, and it was enough to supply the 30,000 people at the peak of the flourish of the city.
Rick: 30,000? So for more than 2,000 years, water has come out of this well.
Antonis: You can still drink if you want.
Rick: Very nice.

About a century before Christ, Delos was devastated by a terrible war. It never recovered and was eventually abandoned. After 14 centuries of silence and darkness, it was finally excavated in the late 1800s, and today, the ruins of Delos are ours to explore.

I cap my visit by climbing to the summit of the island. My reward? One of the Mediterranean’s great king-of-the-mountain thrills. As you observe the chain of islands dramatically swirling in 360 degrees, you can understand why historians believe that these Cycladic Islands got their name from the way they make a circle (or a “cycle”) around this oh-so-important little island of Delos. 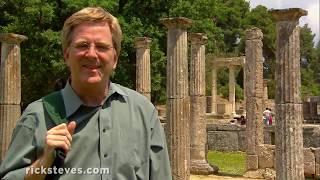 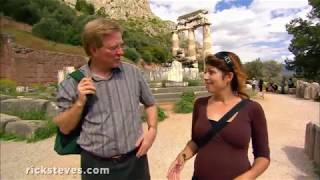 Ancient Delphi, the Oracle of the Gods