Derry (or Londonderry, depending on your politics) was on the front line of Ireland’s sectarian struggles. A visit here can include city ramparts, sectarian murals and flags, and bars catering to either Catholics or Protestants…but not both.

An hour’s drive from Portrush, the town of Londonderry — also known as Derry — is the second city of Ulster. Its characteristic streets are inviting, and the towns’ hard-fought history is evident in its formidable wall. Like Belfast, Derry comes with all the security trappings.

Stephen McPhilemy — a Derry guide — is joining us. Years ago, he showed my tour group his hometown. Steven was so good; he now leads my Ireland tours.

Rick: Stephen, tell me about the political lay of the land.
Stephen: OK, everything that’s in the background that’s green is the Republic of Ireland, and the River Foyle, which is in front of us, is the natural boundary between Northern Ireland, which is on this side, and the Republic of Ireland, which is on that side. But in 1921, when the British were dividing our country, they wanted to hand this city over to the new Irish free-state, but the Protestant community here did not want that. They wanted to keep the city for sentimental reasons. So the River Foyle is the natural boundary, or the border, until it comes to the urban area, then it sweeps around and encompasses the urban area, and then it becomes the river again — the border is the river again at the end of the city. Physically, the city is joined with the Republic of Ireland, but politically it’s in Northern Ireland, and that’s why it been such a hot-bed of political turmoil ever since the trouble started back in 1969.
Rick: Now you called it Londonderry or Derry?
Stephen: To the Protestant community it’s very proudly Londonderry. No Catholics in the city would accept that term — never call it Londonderry. To the Catholic here, it’s always Derry.

Derry is the finest walled town in all Ireland — and visitors are free to walk the ramparts.

Stephen: The walls were built in 1613 by Protestant colonists from the city of London to keep themselves safe from the native Irish Catholics who would have been all around here, surrounding the city. This would have been hostile territory for the new Protestant colonists.
Rick: OK, so about 400 years ago English settlers behind these walls, everywhere out here.
Stephen: Yes, native Irish Catholics, all around the city, up in the highlands, the hills, the valleys, the glens.
Rick: What an incredible wall, really.
Stephen: Yes, we’re very proud of them, Rick. It’s our little claim to fame — we’re the only completely walled city in Ireland, or Britain for that matter.
Rick: Really?

Stephen’s taking me to a pub. In sectarian neighborhoods — pubs are particularly sectarian …a hangout for either Loyalists or Republicans. In this pub, the decor — particularly the Irish flag — makes the politics of these folks perfectly clear — this is a Catholic crowd. Protestants can feel comfortable here unless they say something provocative or wear unionist colors or symbols. Leave your Union Jack at home 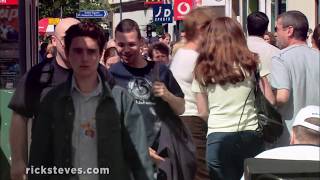 Belfast: Memories of the Troubles 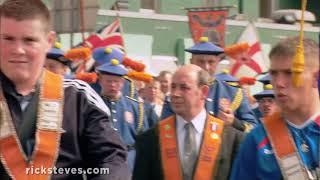