Reformer John Knox, founder of Scottish Presbyterianism, preached at St. Giles' Cathedral. Knox, who wanted everyone to be able to read the Bible, helped reform Scotland’s educational system and extolled thrift and a work ethic.

St. Giles' Cathedral is Scotland's most important church. While its ornate spire is designed to look like the crown of thorns, most locals also see in it the Scottish crown. The church was ground zero as Scotland debated whether to stick with the Roman Catholic Church or break away with the Protestant movement.

Look into the eyes of John Knox's statue and think of the Reformation struggles of the 16th century. Knox, the great reformer and founder of austere Scottish Presbyterianism, first preached here in 1559.

Knox's insistence that every person be able to read the word of God gave Scotland an education system centuries ahead of the rest of Europe. Thanks partly to Knox, it was Scottish minds that led the way in math, science, engineering and medicine. Voltaire called Scotland "the intellectual capital of Europe."

Cathedral guides are stationed around the church ready to answer your questions.

Guide: When Knox took over as minister of this church following the Reformation, he whitewashed the interior, he broke the stained glass. He emphasized the pulpit, the word of God preached to the congregation as the most important fundamental part of his religion. Knox’s theology of course led to the process of work ethic, that wonderful combination of education, hard work and thrift. Because after all, we Scots are very thrifty.
Rick: You’re famous for that, aren’t you?
Guide: Oh very much so. We do suffer from short arms and deep pockets.

This neo-Gothic Chapel — also from the Victorian age — is the private chapel of the Knights of the Thistle. It's used about once a year when Scotland bestows knighthood on one of its leading citizens. The queen presides over the ritual from her ornate stall, marked by her Scottish coat of arms — a heraldic zoo of symbolism. Are there bagpipes in heaven? Apparently, yes.

Rick: Excuse me, sir, do you know where John Knox is buried?
Man: Yes…

By the way, John Knox, Scotland's great reformer, is buried just out back — with appropriate austerity. 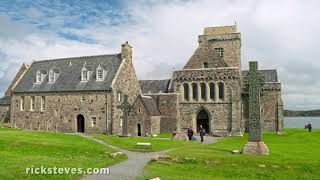 The Isle of Iona: Cradle of Scottish Christianity