Edinburgh’s Royal Mile connects the grand castle (with a museum about Scottish military history) with the palace (where royalty stays). The Museum of Scotland offers a fine hike through all things Scottish. Dinner with a local comes with Scottish cuisine and pride.

We start our visit where the city did — at the Edinburgh Castle, the fortified birthplace of the city over a thousand years ago. This imposing symbol of Edinburgh sits boldly on a rock high above the city. While the castle has been both a fort and a royal residence since the 11th century, most of the buildings today are from its more recent use as a military garrison.

Crowds gather as, traditionally, each day at one o'clock, the big gun is fired giving the ships in the port something to set their clocks by. Why one o'clock and not noon — it costs the frugal Scots eleven fewer rounds.

Your admission comes with a fine guided tour.

Guide: Welcome to the castle, ladies and gentlemen. It takes roughly about 20-25 minutes from the time we leave here to the time we get to the top. You'll all have climbed 414 feet. It's easy! I've done it 10 times a day already. Come on.

…and once you got through gate number 5 or if you got through gate number 5 we still had a surprise for you ‘cause we had gate number 6. And once you'd knocked down all these gates you were basically in the lower defenses which means in the bottom half of the castle and you have plenty of room to fight. The castle has never been taken by force; it has only been taken under siege. Now you see how much trouble we went to keep the English out. We're a bit more diplomatic now… we charge them money to come in.

This is Mons Meg. It was given to James II by his uncle William the Duke of Burgundy as a present in 1457 and the reason why he gave us it is because we were fighting the English. He was fighting the English so it was a common bond. The cannon itself weighs 7 tons, it took 150 lbs. of gunpowder to fire that 300 lb. stone cannon ball less than a mile and three quarters. They sent the Scots many a time to go and pick the cannon balls up, bring them back and fire them again.

This will be the last stop, ladies and gentlemen, and what you want to see in the square now is the Great Hall, Mary Queen of Scots apartments, the crown jewels and of course the Scottish National War Memorial. Thank you for listening.

The Scottish National War Memorial commemorates Scottish soldiers lost in World War I and in British wars since. To fathom the importance of this place to Scottish people, consider that one out of every three adult Scottish men died in World War I. Each bay is dedicated to a particular Scottish regiment. Books of remembrance list the names of that regiment's fallen. The main shrine, featuring the original WWI rolls of honor, sits on an exposed chunk of the castle rock — at the highest point of this sacred hill.

Within these same castle walls, the National War Museum thoughtfully covers four centuries of Scottish military history. It tells the story of how the fierce kilted Scottish warrior changed from being a symbol of resistance against Britain to being a champion of that same empire.

Even when fighting — with rather than against — England, Scottish regiments promoted the romantic kilted warrior image. This was fueled through the 19th century by Queen Victoria's infatuation with the Scottish Highlands and that culture's untamed and rustic mystique. Highland soldiers, especially officers, went to great personal expense to sport all their elaborate regalia.

And the men in kilts fought best to the tune of their beloved bagpipes. For centuries the stirring drone of bagpipes has accompanied Highland soldiers into battle — raising their spirits and announcing to the enemy that they were about to meet a brave and mighty foe.

Scottish soldiers did more than their share of dying for Britain. They fought with valor and were well-decorated. The museum shows the human side of war.

And it shows how clever government sponsored ad campaigns kept lads enlisting. Two centuries of recruiting posters all make the same pitch that still works today: a hefty signing bonus, steady pay, and job security with the promise of a manly and adventurous life — all spiked with a mix of Scottish pride and British patriotism.

As you leave the castle, turn around and look up. Remember two 14th century champions of Scottish liberty — King Robert the Bruce and William Wallace (a.k.a. Braveheart).

Wallace rallied his nation, fighting long and hard against English domination. He was executed in London — hung drawn and quartered with parts of his body paraded through all parts of England. Robert the Bruce beat the English at the Battle of Bannockburn in 1314 — it was the last great Scottish victory.

Bruce and Wallace still defend the spirit of Scotland. The Latin inscription declares, more or less, "What you do to us… we will do to you."

Traveling here, you can get the feeling that Scotland and England are comfortably joined in a union no one seriously questions. But history is seen through different filters. Visit a British-run museum, like the one we just did and the story is told in a "happy union" kind of way. Talk to a local, and you may get a different spin.

My friend and fellow tour guide, Ken Hanley is joining me for dinner — and perhaps a better insight into Scottish/English relations. Above the Old Bell Pub, the New Bell Restaurant serves up fine food in an inviting living room ambience. In researching my guidebooks, I find that, throughout Europe, the small husband and wife-run places — especially if one of them is a talented chef — serve the best meals for the best prices.

Rick: So this really is contemporary Scottish cuisine, you'd say?
Ken: Absolutely, yes. I think that it boils down to people not being aware that we have this old alliance with the French. We have natural produce from seafood to beef and vegetables and that, but because of that 'ol alliance, we have the French je ne sais quoi with Scottish local “goodies” and the end product is something that really surprises people from the States.
Rick: A pleasant surprise when you…
Ken: It's more than a pleasant surprise, absolutely.
Rick: It’s a delightful surprise… The duck, I'm having the duck. Oh, it looks nice, thank you.
Ken: Thank you very much, dear.
Rick: So why are you wearing the kilt?
Ken: I wear a kilt because I'm proud to be Scottish and it shows my natural culture and my natural history and that I'm Scottish, not British.
Rick: Are you Scottish first or British first?
Ken: Scottish.
Rick: Scottish first? British second?
Ken: Second Scottish.
Rick: Scottish second also, huh?
Ken: Aye!
Rick: So is the Scottish spirit alive and well?
Ken: I'll tell you what, Rick, the Scottish spirit is alive, vibrant and the lion is ready to roar.
Rick: Really? And there's no doubt in your mind?
Ken: No doubt at all. [toast in Welsh]
Rick: Slàinte!
Both: Slàinte mhath!

Old Edinburgh's main drag — nicknamed the Royal Mile — leads from the castle downhill through the old town to the palace. This colorful jumble is the tourist's Edinburgh — a dense tangle of historic buildings, fun museums, and cultural clichés on sale.

Edinburgh was a wonder in the 17th and 18th centuries. It was famed for its skyscrapers — they say the first anywhere… but also for its filth. It was once the most congested city in Europe, the most wretched couldn't even afford candles. They lived in darkness. It's said they knew each other not by how they looked… but by how they smelled.

Medieval skyscrapers towered ten stories and higher. Frontage on High Street was so limited that the buildings were narrow and tall — crammed shoulder to shoulder — with little courtyards called "closes" branching off. These closes were connected to the main drag by skinny lanes or even tunnels. Four hundred years ago, Edinburgh was nicknamed "auld reeky." The entire city was a black-stained mess of chimneys and "reeked" of smoke.

The Royal Mile ends at the gates of Holyrood Palace — for 500 years the official royal residence here in Edinburgh.

Rather than living in a blustery castle up on the rock, Scotland's royalty built this fine palace. Even today, when royalty is in town, you'll find them here.

The best way to learn about Scottish history is nearby in the Museum of Scotland. It's amassed more historic artifacts than everything else I've seen in Scotland combined. This museum offers the best-anywhere hike through the history of Scotland.

The Kingdom of the Scots exhibit shows evidence of a vibrant early nation. While isolated by hostilities with England, Scotland managed to connect with the rest of Europe – how? Through trade, the Church, and their Renaissance monarch — Mary Queen of Scots.

Scotland's long underdog struggle with England found inspiration from romantic and almost legendary Scottish leaders. Mary Queen of Scots — educated and raised in France during the Renaissance — brought refinement to the Scottish throne. While she was imprisoned and executed by the English, her memory stoked the irrepressible Scottish spirit.

Two centuries later, another Scottish hero, Bonnie Prince Charlie, led the last hurrah in Scotland's long struggle for independence. This fan — showing Charlie in the company of classical gods — was an accessory at a grand party celebrating a short-lived Scottish victory over the English in the 1740s.

Eventually the Scots were quelled and united with England. Enjoying peace, stability, and English investment as the Industrial Revolution swept Britain, many hard-working Scots prospered. Cast iron and foundries were huge as Scotland became one of the most industrialized places in all of Europe.

With the dawn of the modern age came leisure time, the concept of "healthful sports," and…golf — a Scottish invention. These golf balls — from around 1820 — were leather stuffed with feathers. 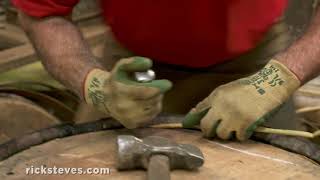 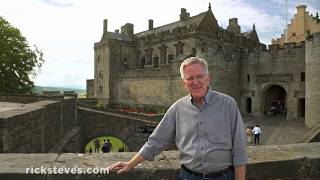 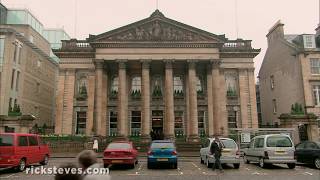