The brooding ruins of Ehrenberg illustrate the importance of strategically locating castles on high ground to control trade routes in medieval times. We’ll also see how advent of gunpowder and cannon meant that castle design had to change.

A hike up to the stark and brooding ruins of Ehrenberg Castle provides a striking contrast to Ludwig’s fantasy castles.

Historian Armin Walch is spearheading a project excavating and developing what he calls an ensemble of castles, which will create a unique open-air museum.

Armin: We have an ensemble of castles, four elements built in different periods. We start here in the Middle Ages with Ehrenberg, we have a Gothic element in the valley, we have a Baroque castle, and we have a brand-new fortification system of the 18th century.

We’re visiting two castles of the ensemble — the 13th-century Ehrenberg and, higher on the right, the 17th-century Schlosskopf.

Armin: This is a very strategic place because it lies on the 2,000-year-old Via Claudia Augusta. This is a route through the Alps, which connected Venezia, Italy with Germany. And this route was in the Middle Ages very important because it transported salt — the white gold. Anyone who controlled the castles controlled the trade. Though in the Middle Age, they had to find the perfect hilltop to build the castle.

A steep hike takes us up to the bigger and more modern Schlosskopf Castle, which Armin and his crew have just recently started uncovering.

Armin: Well, Rick, two years ago, nobody in this town knew, or only a few people knew, that there was a fortification on top of the hill. Two years ago, you couldn’t see anything. It was covered with trees.
Rick: So you shaved this off…
Armin: We shaved it, we cleaned it. It was completely covered with trees. From Reutte you couldn’t see anything.
Rick: Whoah, all right!
Armin: Thirteenth-century castles like Ehrenberg were built with tiny walls, high towers on hills, because of the defense system of the Middle Age. Then they invented canons. Canons made this kind of architecture destroyable.

This became clear in the early 1700s when, by cover of darkness, local Tyroleans wheeled two canon up here and pulverized Ehrenberg Castle, which was occupied by their enemies, the Bavarians. From this point on, Ehrenberg-style castles were obsolete, and canon-proof castles like Schlosskopf became the norm. 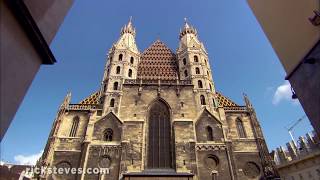 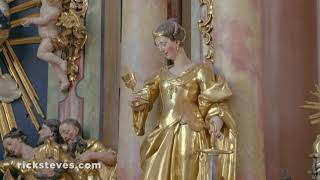 Hall in Tirol and the Historic Importance of Salt