England’s south coast offers a mix of beaches, amusement fun, and chalk cliffs. Brighton, with a Coney Island air, has a pleasure pier and a pavilion fit for a king (specifically George IV). Nearby the steep cliffs of Beachy Head thrill hikers.

But enough war history. Let’s hit the beach! Brighton is south England’s Coney Island. Britain’s royalty helped establish Brighton as a resort back around 1800, when Napoleon’s wars shut down vacation travel on the Continent.

King George IV chose Brighton to build a vacation palace for himself, and royal followers began a frenzy of construction along the nearby seashore. Soon, this once-sleepy seaside village was transformed into an elegant resort town.

In 1840, the train connected London with Brighton. Suddenly these beaches were accessible to the working-class masses and Brighton has been “London by the Sea” ever since.

Two landmarks line the promenade; the latest eye-catcher is a futuristic observation tower. But the big draw remains its pleasure pier. Built in 1899 and jutting far into the water, it gave everyone a chance to enjoy the sea.

Glittering and loaded with amusements, Brighton Pier is the place to go for a fix of junk food, including some “candy floss” (that’s cotton candy), and to survive dizzying rides. If you can ignore the garish arcade games, you might be able to imagine yourself as a Victorian Londoner out on holiday.

Just a couple blocks from the people’s pier was the king’s palace. Brighton’s Royal Pavilion, with its eccentric exterior, recalls the city’s flamboyant heyday. Its interior, which retains its 1820s decor, is even more outlandish.

As a prince, the man who would become England’s King George IV was lively, decadent, and trendsetting. He loved to vacation by the sea and host glamorous parties. George was enamored with Asian cultures, styling his vacation home with exotic decorations from the Far East.

Music was a passion of the king. In the music room the royal band gave concerts and serenaded high-society guests as they danced under Chinese-inspired decor.

The king's other passion? Hosting elaborate dinners. His king-sized kitchen was one of the most innovative of its time. The huge rotisserie could cook enough meat to feed a hundred hungry guests.

You can imagine: King George was an extravagant spender, and he left piles of debt. Shortly after his death, his niece, Victoria, took the throne. Queen Victoria wanted more privacy and less decadence, so she sold the Pavilion to the city of Brighton, which owns it to this day.

After visiting a resort town, England's natural beauty provides a delightful contrast. These chalk cliffs are often mistaken for Dover’s, but they're the white cliffs of Beachy Head — same chalk, same coastline, but further west.

Beachy Head is carpeted by a vast, grassy field — wild, yet smooth as a putting green — reaching up to a dramatic drop-off. With the open sea beyond and white-chalk cliffs plummeting 500 feet into the surf, this scene thrills hikers.

From here, a long, undulating series of cliffs stretches for miles. Long ago, these were dubbed the “Seven Sisters” by groggy sailors at sea who gazed lustily through the mist from their ships and imagined a can-can of seven maidens lifting their lacy petticoats.

While this chalk may look like lace — from a distance, in the fog…in a drunken stupor — it’s actually the shelly sediment of the seabed solidified over a hundred million years and then raised high by the slow-motion collision of continents.

The handy hamlet of Birling Gap has an inviting visitors center. Its stairway provides the only convenient access to the beach. Early birds get the sandy spots among the pebbles, and the tide pools are a hit with the kids.

Beachy Head is just one stretch of the South Downs Way — one of many beloved public walks that crisscross Britain. The English love to ramble and enjoy historic points along the way. Around here, as this mysterious horse illustrates, art has been carved into the underlying chalk of the hillsides for generations. Towering figures, like the Long Man of Wilmington, go back many centuries. The countryside feels made to order for easy walks. 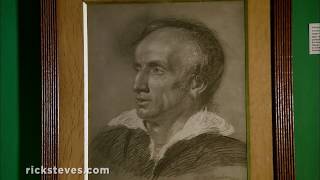