The advanced Etruscan civilization, which flourished in Tuscany 2,500 years ago, was conquered and absorbed by Rome. What remains are Etruscan tombs (such as the Hescanas tomb) and funerary artifacts now in museums, such as in the hill town of Volterra, once an Etruscan trading center.

Tuscany is named after the Etruscan people who lived here centuries before this region was conquered by ancient Rome. Over 2,500 years ago, long before anybody had heard of Julius Caesar, and Rome was just a small town, the Etruscan civilization flourished in this part of Italy.

Etruscan tombs are scattered all over the countryside — located both on good maps and on signposts. We're dropping in on a farm to visit the tomb of the Hescanas family.

This tomb — cut out of solid tufa rock — was discovered by the farmer's grandfather. What little we know about the Etruscans we've learned mostly from their fresco-covered tombs.

The farmer tells me that this tomb dates back to about 350 BC.

The entire family was buried in several sarcophagi in this tomb.

We can read the family name… spelled what we would call backwards… HESCANAS. The faint but still readable frescos take us back to the funeral ritual.

Senor Hescanas rides the chariot into the afterlife. It's a pre-Christian judgment day as a divine magistrate deliberates his case. A heavenly chamber orchestra provides music as women in fine gowns and jewelry dance. The motion and realism captured by the 4th century BC artist is impressive.

Looking at this evidence of such an advanced civilization it's amazing that these earliest Tuscans are still largely a mystery.

With the rise of Rome, Etruscan civilization vanished — steamrolled and absorbed into that mighty empire. Now, with each tomb excavated, archeologists are piecing together the mysterious puzzle of Etruscan culture.

Like many popular Tuscan towns, Volterra sits on an Etruscan foundation. Twenty-five hundred years ago, Volterra was one of the most important Etruscan cities. It was a key trading center protected by a four-mile-long wall.

Its mighty Etruscan gate — built of massive tufa stones — survives. The three seriously eroded heads date from the 2nd century BC and show what can happen when you leave something outside for 2,000 years. The smaller stones are part of the medieval city wall which incorporated parts of the much older Etruscan wall.

Unlike other famous towns in Tuscany, Volterra feels not cutesy and touristic… but real, vibrant, and almost oblivious to the allure of the tourist dollar. A refreshing break from its more commercial neighbors, it's my favorite small town in Tuscany.

Volterra's Etruscan Museum is filled top to bottom with precious artifacts from centuries before Christ.

The forte of this museum is its many finely carved funerary urns — stone boxes containing ashes of the dead. They suggest the Etruscans were influenced by their ancient Greek contemporaries.

But while Greek artists focused on the idealized human form, the Etruscans represented people as unique individuals — portrayed realistically, with wrinkles, crooked noses, and funny haircuts. The museum's extensive collection of urns — with subjects lounging as if munching grapes with the gods at some heavenly banquet — is a reminder that the Etruscans believed you'd have fun in the afterlife. 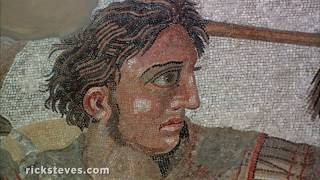