When General Francisco Franco sought to impose fascist rule on Spain, the country’s democratic leaders fought back, and a bloody civil war ensued, won by Franco. An iconic tragedy of the war was Germany’s saturation bombing of Guernica, immortalized by Picasso’s powerful anti-war painting.

By the mid-1930s, fascism was well-established in two of Europe's leading nations, Germany and Italy. Germany was booming, and building up its massive military — blatantly breaking the Treaty of Versailles, which ended World War I. The ideology of fascism was spreading, and the rest of the world was viewing it with alarm.

Expansionism was a key tenet of fascism. Germany first annexed neighboring Austria, then the mostly German-speaking region of Czechoslovakia — the Sudetenland, followed shortly after that by the rest of the country. Italy, under Mussolini, invaded Ethiopia and Albania. In 1939, Hitler and Mussolini signed a treaty creating what they called the "Pact of Steel." Further west, Spain and Portugal were also flirting with fascism.

Spain, like other nations at the time, was making the awkward transition from 19th-century monarchy to 20th-century democracy. By the 1930s, it was governed by a modern but fragile democracy. By 1936, the Spanish people had become extremely polarized, as the old guard of royalty, military, and industry pushed back. Representing this reactionary faction, a military strongman, General Francisco Franco, invaded Spain from Spanish Morocco. Using colonial troops and borrowed Italian planes, he attempted a coup d'état. Like Mussolini and Hitler, Franco vowed a return to order and to restore Spanish power and national pride. But the democratically elected government fought back, and the nation descended into a bloody civil war.

Conservatives under Franco fought the liberal democratic government. It was a brutal war between classes and ideologies, dividing both villages and families. In three years of fighting, hundreds of thousands of Spaniards died. Franco used predictable strongman tactics — including intimidation by police and the military. Hitler and Mussolini, who mistakenly believed Franco would join their fascist alliance, threw gas on the fire.

One of the most tragic episodes of this tragic war was in Guernica, a workaday town in the Basque region of northern Spain. It was here that the world first witnessed the terrible power of the fascist state — a prelude to World War II.

Guernica was the capital of an independent-minded Basque community that stood up to Franco. To break their spirit, Franco enlisted the help of Germany's air force, and the defiant town was decimated in the world's first saturation aerial bombardment.

The Spanish artist Pablo Picasso heard the shocking news and immediately set to work sketching the destruction as he imagined it. In a matter of weeks, he wove these bomb-shattered shards into a large mural called Guernica.

In Picasso's masterpiece [now at the Centro de Arte Reina Sofía in Madrid], a woman looks to the sky, horses scream, a soldier falls — body shattered, sword broken. A wounded woman flees a burning house. A bull — symbol of Spain — ponders it all, watching over a mother and her dead baby — a modern pietà. Picasso's painting put a human face on the horror of war, and threw a stark light on the brutality of Franco and Hitler. To this day, Guernica remains the iconic depiction of fascist crimes against humanity. 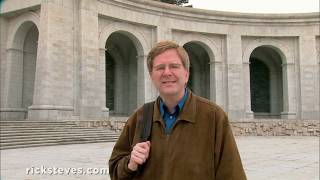 Spain’s Civil War: Valley of the Fallen and Picasso’s "Guernica"