This sprawling, strategically located fortress has served Sweden (to protect it from Russia), then Russia (who captured it by siege), and now Finland. Today it’s a popular park, with cafés and scenic strolls.

A short ferry ride takes us across the harbor to Helsinki's most important sight. Suomenlinna, an island guarding Helsinki's harbor, served as a strategic fortress for three countries: Sweden, Russia, and then Finland. It's now a popular park with a fascinating story.

The fortress was built by the Swedes with French financial support in the mid-1700s to counter Russia's rise to power. Russia's Peter the Great had just built his new capital, St. Petersburg, nearby on the Baltic and he was eyeing the West.

Think of it as European superpower chess. The Russians moved to St. Petersburg. The French countered by moving a Swedish castle here to Helsinki; stopping the Russian offensive…at least for the time being.

The fortress was Sweden's military pride and joy. With five miles of walls and hundreds of cannon, it was the second mightiest fort of its kind in Europe after Gibraltar.

Built by more than 10,000 workers, the fort was a huge investment and stimulated lots of innovation. In the 1760s, this was the world's biggest and most modern dry dock. After the construction of this fort, the village of Helsinki became a boom town supporting this grand "Gibraltar of the North."

Today Suomenlinna is most appreciated by locals for its scenic strolls. Explore the park. There are ramparts to ramble and cannon to ponder. Cafés nestle in the shade of the walls. You'll find Finns on the rocks, and families enjoying their humble beach. 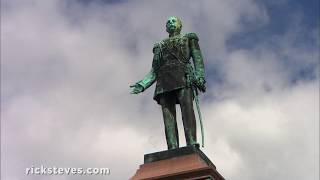