With guidance from a local naturalist, we learn that the Burren, which looks like a bleak and rocky limestone plateau, is surprisingly rich in sights, with rare and colorful wildflowers, Stone Age tombs, and an unforgettable cliff towering over the coast.

From Galway, it’s just an hour’s drive to the Burren, an intriguing 50-square-mile limestone plateau. The Burren is so barren that when Cromwell invaded this part of Ireland in the 1650s, his disappointed surveyor described it as “a savage land, yielding neither water enough to drown a man, nor a tree to hang him, nor soil enough to bury him.”

But he wasn’t much of a botanist. Local guide Shane Connolly loves to show how the Burren is a unique and thriving ecosystem. We’re here in early July — the best season for flowers.

Shane: …All this rare botany, the orchids, the Dryas octopetala, the heathers, wild thyme, the smallest wild rose in Ireland, over 600 varieties of plants.
Rick: Let’s take a close look.
Shane: There’s a lovely example of a geranium, bloody cranesbill. You see it in June, July. That’s why it is called bloody cranesbill — see the seed head here? In the shape of a crane’s beak and that’s what cause the bloody color, not the blossom here. When the blossom falls off, that’s the red sepals. Now, that’s’ a lovely example of the Potentilla — four-petaled — unusual for its family. Right beside it yet to come out is St. Johns Wort. That’s slender St. Johns Wort. It comes out St. Johns Day, 24th June, so hence the name, St. Johns Wort.

The Burren supports the greatest diversity of plants in Ireland. Like nowhere else, Mediterranean and Arctic wildflowers bloom side by side.

Shane: What you’re looking at here is the foliage of Dryas octopetala. It’s a plant of the tundra. This area was tundra, it’s disappeared and this is still here — in other words, it came with the glacier. But also we’re looking at the Mediterranean orchid, the heat spotted orchid. It came with the land bridge and survived the changes as well. There you have it; A plant from that climate, that landscape, beside a plant from the Mediterranean

Wander for some quiet time with the wildflowers. Limestone, created from layers of sea mud, is the basis of the Burren. The earth’s crust heaved it up and the glaciers swept it bare — dropping boulders as they receded.

The Burren is also rich in mysterious ancient sites. This is the Portal Dolmen. Four hundred years ago, locals thought this was a “druid’s altar.” Four thousand years ago, it actually was a grave — covered by a now long-gone mound of dirt.

The western edge of the Burren is marked by the Cliffs of Moher. A visit here offers one of Ireland’s great natural thrills. For five miles, the dramatic cliffs soar as high as 650 feet above the Atlantic Ocean.

While I wouldn’t recommend this, thrill-seekers find a special peace all alone here at the edge of Ireland. You’ll find yourself in a dramatic world where the only sounds are the waves, the wind, and the gulls — playing in the updrafts. 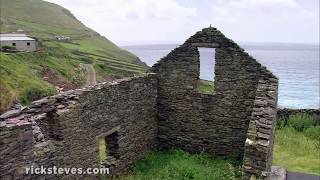 Dingle, a Gaeltacht in Southwest Ireland