A dramatic, cliff-topping drive along Italy’s stunning Amalfi Coast comes with glittering Mediterranean views and picturesque towns like Positano sprawling down steep hillsides. Amalfi Town, once the capital of the Republic of Amalfi, has a fine Neo-Byzantine cathedral and a real-life vibe.

The Amalfi Coast is chaotic, scenic, in-love-with-life Italy at its best. With its breathtaking scenery, dramatically perched port towns, and historic ruins, the Amalfi is Italy's coast with the most. Whether you ride the bus or a taxi, the trip south from Sorrento is one of the world's great road trips. You'll gain respect for the Italian engineers who first built the road — and even more respect for the bus drivers who drive it. Cantilevered hotels and villas cling to the vertical terrain. And beautiful sandy coves tease from far below. As you hyperventilate, notice how the Mediterranean really twinkles.

Traffic is so heavy that private tour buses are only allowed to go southbound. Even so, because of the narrow roads and tight corners, expect some delays…

Rick: Beautiful, look at the engineering here.
Raffaele: This road is very, very old. It is about 750 years old.
Rick: 750 years?
Raffaele: Yes. For make this road it takes about 150 years from Sorrento down to Salerno.

Specializing in scenery, shopping, and sand, the resort town of Positano hangs on the most spectacular stretch of the coast. Only one street in Positano allows motorized traffic — the rest are steep pedestrian lanes. Because bus access is so limited and hotels don't take large groups, the town — unlike Sorrento — has been spared the impact of big-bus tourism.

The village is squished into a ravine, with narrow pedestrian-only alleys that cascade down to the harbor. The "skyline" looks like it did a century ago — strict building codes prevent modern structures. The town's shallow rooftop domes are filled with sand. These provide insulation — cool in the summer…warm in the winter.

Positano's steep lanes are a way of life for the 4,000 hearty residents. It's a pleasant gathering of cafés, galleries, and boutiques. There's little to do here but eat, window-shop, and enjoy the beach and views...and that's exactly the way its many visitors like it.

The beach is a relaxed scene. Boats shuttle visitors in and out. Young Romeos polish their craft. And the café crowd watches it all unfold.

There's really no way to avoid the climbs that come with this staggering scenery. To save a few steps, I enjoy the efficiency of having a cell phone on the road. You can buy a cheap one here or bring one that works in Europe from home. I'm ready to head on and Raffaele said to just give him a call to be picked up.

Many of the best Amalfi Coast views are just south of Positano. You'll see several medieval watch-towers built to warn of Turkish or Saracen pirate attacks.

The Amalfi Coast is named for this town. After Rome fell, Amalfi emerged as an independent republic. Innocuous as it looks today, in its 10th-century heyday, Amalfi was a maritime power. With a trading fleet that controlled this region, it competed with Genoa and Venice.

The Republic of Amalfi minted its own coins; it even established the "rules of the sea" — the basics of which survive today. But in 1343, this tiny powerhouse was devastated by a tsunami. This disaster, compounded by a deadly plague, left Amalfi a humble backwater.

Today the shipyards, where its powerful galleys were built a thousand years ago, house tourist shops, and the former glory of Amalfi's pint-sized empire is remembered on this tiled map. But tourists seem oblivious to the towns illustrious past. They're here to enjoy the good life under the Amalfi sun.

Today, the town lives off tourism — and boasts a cathedral grander than a town of 7,000 would merit. The church's imposing stairway provides an ideal hangout for locals. Its fanciful façade is neo-Byzantine, dating only from the 19th century. But this bronze door is a thousand years old, given to Amalfi by a wealthy local merchant who had it made in Constantinople.

The cathedral is richly decorated. Behind its fine 13th-century wooden crucifix, a painting shows St. Andrew martyred on an X-shaped cross. And St. Andrew himself is buried here. Holy relics were sources of power in the Middle Ages. Like Venice needed the bones of St. Mark to get on the pilgrimage map, Amalfi got St. Andrew — one of the apostles who left his nets to join the original "fishers of men."

St. Andrew's remains were brought here from Constantinople in 1206 during the Crusades —that's an indication of the wealth and the importance of Amalfi back then. St. Andrew is near and dear to the people of Amalfi because he's credited with saving the town from certain pillage and plunder back in the 1500s during a pirate raid. Just when a horrible attack seemed inevitable, a freak storm hit and the pirate ship was destroyed.

This plank is all that remains of that ship. This and other treasures of the cathedral are well displayed in the adjacent museum. The Angevin Mitre, with a "pavement of tiny pearls" setting off its gold and gems, has been worn by bishops since the 14th century.

The "Cloister of Paradise" is a peaceful as well as evocative place for a shady rest. Its graceful columns protect stone sarcophagi, as this was the cemetery of Amalfi's nobles. The bell tower, with its majolica tiles — a regional specialty — stands high above the cathedral. 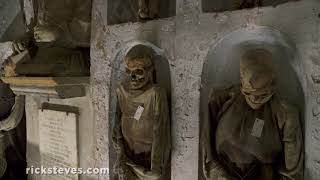