Liverpool has long been a major port, aiding the slave trade in the 18th century and transporting emigrants, mainly to the US, in the 19th century. The town’s centerpiece is Albert Dock, and the main draw is the Beatles, who got their start here.

Liverpool, just over the border in England, is a gritty but surprisingly enjoyable city. It offers a fascinating urban contrast to the natural splendors of Wales. It's an interesting stop both for Beatles fans and for those who'd like to look urban Britain straight in the eyes.

The city, once run down and pretty grim, is enjoying a renaissance. Albert Dock is the centerpiece. Opened in 1846 by Prince Albert, Queen Victoria's husband, the docks enclose seven acres of water. It's surrounded by a five-story tall brick warehouse — now housing fine restaurants, concert venues, a convention center, and fancy condos.

In its day, Liverpool was England's greatest seaport. It prospered as one corner of the triangular commerce of the 18th-century slave trade.

British merchants and shippers powered this three-sided trading scheme. They exported manufactured goods to Africa in exchange for enslaved Africans who were then shipped to the Americas and traded for raw materials — like cotton, tobacco and sugar — which they imported back to Britain. While parties on all three sides made money, the big profits came home to England. As Britain boomed, so did Liverpool.

The Merseyside Maritime Museum tells the story of the port of what was the second city of the British Empire. After the shipping of slaves was outlawed in Britain in the early 1800s, Liverpool kept its port busy as a transfer point for Emigrants.

Whether your ancestors came from Scandinavia, Ukraine, Ireland or Wales, there's a good chance they left Europe from this port. Between 1830 and 1930, nine million emigrants sailed from Liverpool to find their dreams in the New World. Most went to the USA. Awe-inspiring steamers like the Lusitania called this port home.

Many of us know Liverpool as the springboard for the band that changed the world back in the 1960s — the Beatles. The Beatles Story is a museum about the band that made rock & roll a worldwide phenomenon. Many people visit Liverpool just to remember John, Paul, George, and Ringo.

Guide: Ok, folks, on the right hand side is the McCartney house. John and Paul wrote some of their first hits in this house.

For a proper "Beatle pilgrimage" you need to take a Beatles tour. Several companies run tours daily — from slick big buses to more personal mini-bus tours. Guides are fountains of Beatle trivia, giving you the entire run down on every sight in town associated with the group and its music.

Guide: …and it was in these poorer parts of Liverpool that the Beatles were born and grew up and in fact Ringo Starr living in Admiral Grove on the right we're even going past the pub where his mother had to work to pay for the rent.

Then you've got the bank on the corner, with the arrogant Bank Manager. Paul McCartney sings, on the corner there's a banker with a motor car the little children laugh behind his back.

Further down the road is the fire station with the clean machine, on the corner there's a barber showing photographs of all the heads he's had the pleasure to have known. All the people stop and say hello. All these things you see throughout the year that Paul McCartney describes in songs are taking place still to this day. 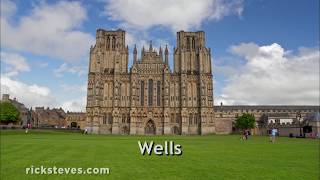