Hi. I'm Rick Steves, and this time, we're sailing to the remote and fascinating island of Malta. Welcome aboard.

The captain of our cruise ship advised being up early to enjoy the entry into the Grand Harbor of Malta, the historic heart of this remote island, serving three cities, including the capital city of Valletta. Clearly, this port was well-worth some serious fortifications. With the different port every day schedule of our cruise, we'll have a busy day to explore it.

Our ship just squeezes into the historic harbor and, in moments, we're in the old center of town, ready for a full day of sightseeing.

Malta is a tiny, independent country set between Sicily and Africa. With a culture enriched by a long parade of civilizations, it's a strategically placed island-nation with an extraordinary history.

The capital city of Valletta is a stony monument to this hard-fought history. Government buildings seem to demand obedience, and a commanding view from the ramparts of the heavily fortified harbor reminds the visitor of Malta's strategic importance through the centuries.

Today, it seems the main strategy is staying out of the sun. The charming Baroque gardens are filled with people enjoying the shade and the refreshing ambiance of a fountain.

The sleepy island vibe is easy to experience on a dgħajsa, the traditional Maltese gondola. These quaint vessels stay busy shuttling people across the harbor. Nowadays, with the help of a very nontraditional outboard motor, or you can just check the local gang fishing.

Of the many cultures that shaped it, perhaps the most obvious is its British heritage. Malta spent 150 years as part of the British Empire. In World War II, it was a key allied naval base and therefore, was devastated by German bombs.

Much of Malta has been rebuilt in recent years. While it gained its independence in 1964, Malta retains its British flavor. English-style pubs and food, statues of queens, and red phone booths.

While its first language is a semitic language called Maltese, English is virtually universally understood.

The Knights of St. John were headquartered on the Isle of Rhodes, but in 1523, they were defeated by the Ottoman Turks. They retreated here to Malta where they set up their new capital and built a huge fortress in anticipation of another Turkish attack.

Malta's stout walls, many of them incorporated into existing limestone cliffs, survived a siege in 1565 of 40,000 Ottoman sailors.

The stately Grand Master's Palace is a reminder that most of the stonework in this stony city dates to the period that followed. It's called the Knight's Period from 1530 to 1798. That's when this was the leading city of the Knights of Malta.

The grid plan of streets was laid out with the new fortress. After the Turkish threat passed, the city was ornamented with delightful architecture, including characteristic enclosed balconies called Galleria.

As you stroll, you'll enjoy an inviting and nostalgic patina of age in its facades.

Like so much of Valletta, St. John's Co-Cathedral — Malta has two cathedrals — dates from the Knight's period. While austere outside, its interior is fabulously Baroque.

The Order of St. John was represented by eight countries and each had a chapel here at the Order's high church. This chapel was from Eragon.

Paintings tell the story of the Order. How the knights were originally serving knights, whose mission was to care for pilgrims venturing to the Holy Land, how they evolved into a military power with a mighty navy, and how ultimately, Christianity would triumph over the Muslims.

A highlight is the largest canvas ever painted by Caravaggio, The Beheading of St. John the Baptist. Painted in 1609, he gave it to the cathedral. Notice his signature mastery of the play of light.

The Maltese Cross is the symbol of the Order of the Knights of Malta. The knights wore it on their robe. The cross represented the four virtues and its points, the eight Beatitudes as well as the eight countries making up the multi-national order.

Within the short drive from the main city are a number of interesting sights. Sleepy towns come with both oversize churches and laid-back locals. Tiny and remote harbors hideout along the dramatic and rugged coastline. Local guides take tourists to numerous nooks and crannies, including the island's blue grotto.

The landscape, which seems timeless, is dotted with prehistoric ruins dating back an astounding 5,000 years.

Megalithic sights like Hagar Qim are evidence that in roughly 3000 BC, settlers from Sicily arrived in search of arable land. While the humble mud-brick village that once surrounded this temple is long gone, stones from the temple still stand. Archaeologists believe this was a temple to a fertility goddess and that it functioned as a celestial calendar.

Malta, dotted with small family farms, has been terraced since ancient times. Rock walls defend against erosion. Without them, the thin layer of topsoil would be lost to the steady Mediterranean wind. The land feels burned off. Locals are nostalgic about the days just a few years ago when it used to rain more.

A short drive away is the fisherman's harbor of Marsaxlokk. A favorite with cruise travelers, it's home to a fleet of typically Maltese fishing boats.

While Marsaxlokk has a fine main square and church, the action is along the harbor, especially during the Sunday market, when it's all about fish.

Tradition says that the shape of the boats goes back eight centuries before Christ to when Malta was a Phoenician colony. These colorful boats pop in the dazzling sunlight, seeming to celebrate yet another distinct heritage of the Mediterranean world.

I hope you’ve enjoyed our fascinating look at the island of Malta. I'm Rick Steves. Until next time, keep on travelin’. 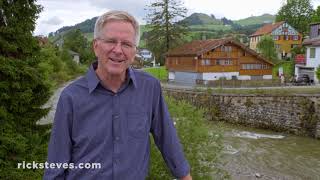