The Medici, an art-loving family of wealthy bankers (and three popes), helped fund the Renaissance. They regularly hosted artists and commissioned art for their palace and their family tomb — the Medici Chapel — a masterpiece by Michelangelo.

Florence was the epicenter of the Renaissance, that cultural explosion that propelled Europe out of the Middle Ages and into an economic, intellectual, and artistic boom time. This is the city where civic pride, an abundance of genius, lots of wealth, and a passion for merging art and science ushered in an age of humanism. In the space of a couple generations, Florence gave us Brunelleschi’s dome, Leonardo’s Mona Lisa, and Michelangelo’s David. This remarkable town — with just 60,000 people in the 15th century — would help lead Europe into the modern age.

You can’t have an art boom without money. And the Medici family, who ruled Florence for generations from palaces like this, was loaded.

It was the Medici wealth — they were bankers — along with their passion for art, and their super-sized egos that helped Florence fund the Renaissance and make this city the art capital of the western world.

The statues in their garden are a reminder that it was in Florence that art was first commissioned simply to be enjoyed by a wealthy elite. With the Renaissance you had art not just to teach Bible stories or to glorify kings. Now, rich people sponsored art just for art’s sake.

The art-loving Medici hosted lots of famous artists, philosophers, and poets. Imagine. A teenage Michelangelo lived with them almost as an adopted son. Leonardo da Vinci played the lute at their parties. And Botticelli actually studied the classical statues that dotted their gardens.

Today the plush world of the Medici is on display in their palaces. This lavishly frescoed family chapel takes you back to Florence — at least the Florence of its aristocratic class — in the 1400s.

The walls around the altar display The Journey of the Magi, or Three Kings, on their way to Bethlehem, by Benozzo Gozzoli.

Showing no shortage of ego, a Medici prince portrays himself as one of the Three Kings. This is an idealized image of Lorenzo the Magnificent — leading a parade of Florentines through a rocky landscape. Rather than the Holy Land, the scene is set in 15th-century Tuscany. Behind the king are other family members along with the city’s rich and powerful of the day. These elegant Florentine dandies are actually realistic portraits, showing the leading characters of Florence around 1450. They’re wearing colorful clothes that set trends throughout Europe.

The chapel doubled as the place the Medici received important guests. And by portraying their family in this religious setting, the Medici made an impressive display of power and sophistication. When potential rivals would drop by and see this, they could only think, “Damn, those Medici are good.”

Powerful as they were, the Medici were mortal, like everyone else, and eventually ended up down the street at San Lorenzo, in a grander Medici chapel — which served as the family tomb. Designed by Michelangelo at the height of his creative powers, this richly decorated room — created completely under one artist’s control — is an ensemble of innovative architecture, tombs, and sculpture.

Michelangelo, who personally knew three of the four family members buried here, was emotionally attached to the project. This is the work of a middle-aged man reflecting on his contemporaries dying all around him. And, it seems to me, reflecting on the tension between humanism, salvation, and his own mortality.

The room is strikingly empty of Christian iconography. Lorenzo II is shown as a Roman general, seated, arm resting on a Medici money box, and bowing his head in contemplation.

His sarcophagus bears two reclining statues, metaphors for birth and death: Dusk, worn out after a long day, slumps his chin on his chest and reflects on the day’s events. Dawn stirs restlessly after a long night as though waking from a dream.

Opposite, on the tomb of Lorenzo’s brother, Giuliano, Michelangelo portrays, Night and Day. The woman representing Night looks almost masculine, reflecting Michelangelo’s passion for capturing the musculature of the human body.

The man, representing Day, struggles to be comfortable, each limb twisting in a different direction. These statues represent the swift passage of time, which eventually overtakes everyone… even the most powerful.

Day, Night, Dawn, and Dusk — brought to life in this room by the greatest sculptor of the Renaissance — meditate eternally on Death.

On the city’s main square stands the Palazzo Vecchio, Florence’s City Hall. While the exterior is medieval, Michelangelo’s David (this one’s a replica) seems to welcome you into the Renaissance world — and the dawn of our Modern Age. The elaborate courtyard, with its Roman inspired decoration, is textbook Renaissance.

The enormous main hall is designed to impress 500 guests at the same time. In an age before it was possible to buy mass media, this was how you shaped public opinion. The art trumpeted the glory of Florence, thanks to the Medici. The frescoes recall great military victories: Florence beating Pisa 1497… Florence trouncing Siena in 1555. The ceiling heralds the divine glory of the grand duke Cosimo de’ Medici. Dressed as an emperor and blessed by the pope, he was the first Medici to rule like a king.

In front, you’ve got Leo X, the first of three Medici popes — giving the family some nice connections in both Rome and heaven and explaining how the Medici family became the bankers of the Vatican. The hall is flanked by statues showing the heroic labors of Hercules, a mortal who became a half-god through his labors… a parallel not lost on wowed Florentines. Again, you gotta be impressed by those Medici.

The Uffizi Gallery: The Best Paintings of the Florentine Renaissance 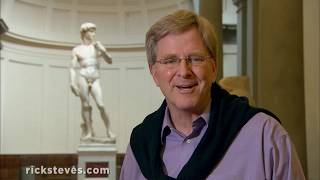