Ruled by the same family for 700 years, Monaco boasts a famous car race, a world-class aquarium, and an elegant casino where the rich become less rich. It’s glitzy and pricey, yet a Riviera must for many tourists.

On the Mediterranean Sea, basking between the French and Italian Rivieras, the Principality of Monaco barely fits on its one square mile of territory.

Of its 30,000 residents, less than 10,000 are true Monegasques, as locals are called. Many of the rest call Monaco home because there's no income tax. Despite over development, high prices, and mobs of tourists, a visit here is a Riviera must.

And Monaco is a work in progress. The district of Fontvieille was reclaimed from the sea. It bristles with luxury high-rise condos. The breakwater — constructed elsewhere and towed in — enables cruise ships to dock. And cars still race, as they have since 1929, around the principality in one of the world's most famous auto races, the Grand Prix of Monaco.

The miniscule principality has always been tiny. But it used to be less tiny. In the 1860s it lost most of its territory to France. But the prince built a casino and managed to connect his domain to the rest of the Riviera with a new road and a train line.

Humble Monaco was suddenly on the Grand Tour map — the place for the vacationing aristocracy to play. Today, the people of Monaco have one of the world's highest per-capita incomes, with plush apartments to match. Its famous casino allows the wealthy to enjoy losing money in extreme comfort.

If Monaco is a business; the prince is its CEO. While the casino generates only a small part of the state's revenue, its many banks — which provide an attractive way to protect your money from the taxman — earn much more. There is no income tax here, but the prince collects plenty of money in value-added taxes, real estate taxes and corporate taxes.

Nearly all of Monaco's sights are packed in a Cinderella neighborhood atop its fortified hill. Its impressive aquarium, which proudly crowns the cliff like a palace, was directed by Jacques Cousteau for 17 years.

A medieval castle sat where Monaco's palace sits today. The palace square features a statue of François Grimaldi, a renegade Italian who captured Monaco disguised as a monk in 1297.

This first ruler of Monaco established the dynasty that still rules the principality. Today, over 700 years later, the current prince is his direct descendant.

Palace guards protect the ruling Grimaldi family 24/7 and they change with the pageantry of an important nation. Every day at about noon tourists pack the square to witness the spectacle in this improbable little princedom. 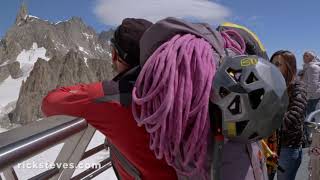