Claude Monet’s later paintings, inspired by his garden at Giverny, are beautifully displayed at the Orangerie. The garden’s water lilies, dappled ponds, and sunlit reflections provided the perfect subject for his Impressionist goal: capturing the play of light.

You can enjoy another delightful dimension of Paris in its parks. There's always a garden or park nearby offering a fine place to stroll and simply enjoy a quiet moment in the middle of the city. One of the biggest city parks originated as the king's back yard, the Tuileries Gardens.

The king's yard included an indoor garden called "the Orangerie." While the Orangerie no longer contains plants, today it's filled with a garden of Impressionist and early-20th-century paintings — select works by Renoir, Cézanne, Gaugin, and others.

And its main attraction is Monet's Water Lilies, floating dreamily in the oval rooms the artist himself designed to showcase his masterpiece. This series of expansive, curved panels is the epitome of Impressionism. It immerses you in Monet's garden at Giverny — his home and studio outside of Paris.

Like an aging Beethoven who composed his most dramatic works while losing his hearing, the nearly blind Claude Monet spent his final years painting these symphonies of color on a similarly monumental scale.

We're looking into his pond — dotted with water lilies and dappled by the reflections of the sky, clouds, and trees on the surface. Monet mingles the pond's many elements and then lets us sort it out.

The true subject of these works is not the pond itself. It's the play of the light reflecting off the water. Monet would work on several canvases at the same time — each one catching the light of a particular time of day.

Get close and see how Monet worked. Starting from a blank canvas, he'd lay down thick, big brushstrokes of a single color, horizontal and vertical to create a dense mesh of foliage. Over this, he'd add more color for the dramatic highlights, until he got a dense paste of piled-up paint. Up close, it's messy — but back up, and the colors resolve into a luminous scene...just pure reflected color.

Working, he'd move with the sun from one canvas to the next. Panning slowly around this hall, you see the pond turn from pre-dawn darkness to clear morning light to lavender late afternoon to glorious sunset. Sublime and tranquil, Monet intended this to be a place of reflection.

Back when Monet was painting, Paris was busy with artists. Capturing the light: That was their passion, and wandering these elegant streets and inviting parks, it's easy to imagine them gaining inspiration here in Paris, nicknamed the "City of Light." 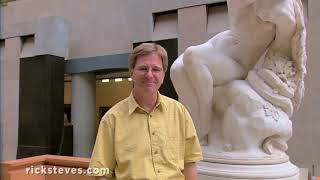 The Orsay Museum and Impressionism in Paris