Mount Vesuvius overlooks the town it destroyed in AD 79. Excavations reveal daily life in Pompeii through its forum, homes, and public baths. The town’s exquisite mosaics and statuary (now in Naples) convey its sophistication.

The sweeping Bay of Naples arcs from its teeming city south past the ancient ruins of Pompeii all the way to genteel Sorrento, the gateway to the Amalfi Coast. And towering above is the mighty volcano, Mount Vesuvius.

The entire bay is well served by a rickety but reliable commuter train. Because it circles under Mount Vesuvius, the train's called the Circumvesuviana.

From the Pompeii stop, shuttle vans take curious visitors up the volcano to the end of the road.

From there, a thirty-minute hike takes you to the 4,000 foot high summit of mainland Europe's only active volcano. Belly up to the crater edge viewpoints. The last eruption was in 1944. The steaming vents are a reminder that while Vesuvius may be quiet, it's just taking a geological nap. Hiking around the crater's lip you enjoy spectacular views of its fertile and densely populated surroundings.

While Mount Vesuvius is sleepy today, in AD 79, the volcano exploded, sending a cloud of ash and cinders 12 miles into the sky. It spewed for 18 hours sending a red-hot avalanche racing down the mountainside at about 100 mph burying the city of Pompeii in 20 feet of scalding debris.

Life in Pompeii was stopped in its tracks. Today, excavations of this once booming city offer the best look anywhere at ancient Roman life. For archaeologists, Pompeii was a shake-and-bake windfall.

Ancient Rome controlled the entire Mediterranean Sea. That made it a kind of free-trade zone — and Pompeii was an important port town. It was big — 20,000 people. It was an important commercial center — imagine this square just busy with market activity. And because it was a port, it was a kind of a sailor's quarter and that meant it was fun: lots of bars, baths, brothels, restaurants, and places of entertainment.

The main square, or forum, was Pompeii's commercial, religious, and political center. The Curia housed the government. It was built of brick and mortar…a Roman invention. It was originally faced with gleaming marble. The basilica, or law court, was nearby. Here you see the basilica floor plan that medieval churches adopted after Christianity became legal.

In good Roman style, the city was well-organized with a grid street plan contained within its walls. Remains of homes give a glimpse into Roman lifestyles.

The House of Vetti, the home of a wealthy merchant, shows the typical layout of a mansion. It's colonnaded atrium — with formal garden and water flowing to give freshness — was ringed by colorfully frescoed rooms. Roman dining rooms were always richly decorated. This one shows little cupids playing out commercial activities of the town: collecting flowers, taking your knocks on a chariot, and enjoying the local wine.

For a better understanding of life at Pompeii, Italian archeologist Gaetano Manfredi is taking us on a walk. Pompeii's impressive baths were just past the gymnasium. After working out, Romans would relax, be pampered, and enjoy the social scene in a public bath.

Gaetano: This was the tepidarium so people coming from gymnasium after sport they were massaged by the slaves. Inside the niches all around there were oils, creams, perfumes for the body massages. A part of the ceiling is still original and so we can see how beautiful decorated it was once on the ceiling… they were massaged by the slaves 25, 30 minutes before going to the sauna. Because tepidarium means lukewarm bath.

After the tepidarium there was the caldarium, which was the hot bath. Beside this wall there was a room where the slaves made the fire. The hot air went underneath the double floor because this floor is supported by little columns and the hot air went between the double walls. There was a circulation of hot air and just when everything was really hot, they opened the water fountain over here, the water slowly fell on the floor, the floor was hot and this produced steam.

The last stop was the frigidarium — the cold bath. As we still do today, after the sauna to harden the muscles and for the body's circulation…the cold bath.

Water was abundant in this well-plumbed city. Fountains provided a social center at intersections. And a steady stream of water flushed the chariot rutted streets clean.

Rick: So why the stones in the street here?
Gaetano: Well there was always water flowing along the roads and washing the roads so that's why the sidewalk over and the stepping stones
Rick: So the pedestrians walk across and not get wet?
Gaetano: Yes to the crossroad avoiding wet feet.
Rick: Very smart.

While the site is evocative, the horrors of that day in AD 79 are hard to imagine.

Gaetano: Thousands of people died in this eruption. Here we have the cast of those people. During the excavations, sometimes the archaeologists found under the volcanic materials cement the spaces left by the composition of the bodies. And so what they did, they injected a liquid plaster in these empty spaces. The liquid plaster took the form of the previous bodies and when it dried up the archaeologists clean all the ash away and appear, the body, in the same position the man was when he died 2000 years ago.
Rick: One day a thriving city, the next day this.

Pompeii was excavated back in the 1700s — before Italy was united. The local king who ruled from Naples demanded "Bring me back the best of whatever you find!" That's why, even though this site is so impressive, the finest art and artifacts of Pompeii ended up back in Naples, at the National Museum of Archaeology.

For lovers of antiquity, this museum by itself makes Naples a worthwhile stop. The city's one essential museum visit offers the best possible peek into the art of Pompeii. The collection ranges from grand statuary and exquisite mosaics to the most intimate details of everyday Roman life.

It's easy to forget that, for many centuries, the people of Pompeii painted Mount Vesuvius like this… before it blew its top.

These bronze statues, like so much of the art from Pompeii are 1st century BC copies of 4th century BC Greek originals. They decorated the holiday home of Julius Caesar's father-in-law. Resting Hermes — with his tired little heel wings — is taking a break… but it's clear, he'll be flying off again soon. The Drunken Faun — singing and snapping his fingers to the beat, is clearly living for today — true to the Epicurean philosophy Caesar's father-in-law subscribed to.

Pompeii's many finely crafted mosaics give a sense of the sophistication and wealth of the city…and its people.

Culture thrived at Pompeii. This mosaic takes us backstage at the theater just before curtain time…actors are being dressed, instruments tuned…and the masks that still symbolize comedy and tragedy today are ready to go.

Another finely detailed and realistic mosaic-shows street musicians — boisterously entertaining those not quite up to a night at the theater.

This scene from the grand Battle of Alexander — with over a million pieces — decorated a floor in Pompeii's House of the Faun. In this epic battle, Alexander and his Greeks meet and defeat Darius and the Persians. The outcome is clear by the fear in the eyes of the Persians and the focus and determination of Alexander the Great. Notice the dynamism, shading, perspective — everything the Renaissance artists would work so hard to relearn 1,500 years later. 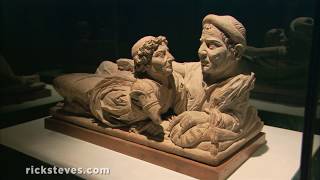