Palermo offers a vivid taste of urban Sicily. Exploring Arab-style markets, enjoying Grand Norman churches, and joining locals at rustic tavernas, we appreciate its many-layered history. And that history comes to life as we join a countess for a tour of her palace.

Palermo is a great starting point to untangle the story of Sicily. The island was a thriving Greek colony 500 years before Christ. Then came ancient Rome for a few centuries and it fell. After some chaos, Sicily flourished again in the ninth and 10th centuries under Arab rule. Then, in the 11th century, the Normans came. While that ushered in Sicily’s glory days, the parade of conquerors just kept on coming.

Palermo, Sicily’s main city and historic capital, is a busy port corralled by mountains. A noisy and energetic metropolis, its architecture reflects the rule of its many overlords as well as its rich heritage. Walking the lively streets, you’re surrounded by a scruffy elegance. The city invites exploration.

You feel the city’s boisterous spirit in its markets. Here at the gritty Ballarò Market, you wander among a commotion of stalls — all competing for the buyer’s attention. It’s an entertaining scene complete with singing salesmen — each with his own unique style.

Whether you understand the lyrics or not, this slice-of-life market action is some the best in Europe. And don’t just gawk — adventure in…try something new.

Just like his father did, Pippo sells the odd bits of the cow — it’s all boiled, from hoof to snout…and I’m picking its nose.

Pippo: Bollito, bollito magro. [Boiled, boiled thin.]
Rick: Grazie! Alright!
Pippo: Prego. [You’re welcome.]
Rick: Oh…delizioso!
Pippo: Bollito! Bollito magro!
Rick: So you take a little cow, you cut off his nose, you boil it, sprinkle it [with] a little salt — you got a snack.

A thousand years ago, after Sicily was conquered by the Arabs in the ninth century, Palermo was one of Europe’s leading cities. With a population of 100,000, it was second only to Córdoba in Spain. In its Arab days, it had about 300 mosques. Later, the Normans (from France) pushed out the Arabs, and it became Christian again, building great churches where grant mosques once stood.

Sicily’s complicated history of domination — which scrambled the gene pool — can be seen in the faces of its people: Carthaginians, Greeks, Romans, Byzantines, Arabs, Normans, French, Spanish, and Italians have all captured and ruled the island at some point.

A history of absentee landlords dating all the way back to the Romans left Sicily mired in a persistent poverty. And centuries of this top-down oppression left a culture inclined to accept corruption and to be cynical toward the law. Because of that, organized crime — called the “Mafia” here — became a part of Sicilian society. This made Palermo a dangerous place.

But the power of organized crime in Sicily has ebbed. In the 1990s, the government waged a vigorous campaign to finally rein in the mafia. These two leading judges, who led the charge, were assassinated. This tragedy finally turned the public against organized crime, and today it has nowhere near the power and influence it once had.

While Palermo certainly retains its rustic character, in the last generation, the city has renewed itself with gentrified neighborhoods and upscale shops and hotels. And today, Palermo feels as safe as any Italian city.

The Quattro Canti — that means “four corners” — is a Palermo landmark. The intersection of two main thoroughfares, it divides the city into its four historic neighborhoods. The niches hold statues of the four Spanish kings of Sicily — another reminder of this island’s many-layered history. And from here, early each evening, springs the ritual of the passeggiata.

Strolling from here to the opera house is endlessly entertaining, offering vignettes of local life and culture.

As the workday ends, people gather at their favorite hangouts. Here at Taverna Azzurra, it’s a colorful scene where the neighborhood gang enjoys the same old routine, but a never-boring conviviality.

We’re joining a tour of the palace of a Sicilian noble family. Count Federico and his Austrian wife, like many nobles, need to open their world to the common masses in order to pay their bills. The charming Countess Alwine shows us around with an engaging joy.

Countess Alwine: So, this is where you came in and now we do the whole tour around the courtyard. You can see we here have a long line of rooms going through, but they’re actually not straight, they’re a bit curved, because we’re here on top of the Punic Roman city wall. You must imagine more than 2,000 years of history under our feet. Look, these are some of my husband’s ancestors. From the 16th century on, everybody lived here in the house and everybody was born in the house. Yeah, if you want to stay for dinner tonight, we have, we can do spaghetti aglio e olio. Look, we’ve got lots of aglio, garlic. And actually, this is where I love to, actually, to lie on the sofa, read my book, and look how beautiful to dream under fresco like this.

The Count has stolen me away into his private studio — a kind of aristocratic man cave — to share his passion for Italian racing cars. His enthusiasm overcomes any language barrier.

And our group’s in luck, as Alwine’s circle of musical friends has assembled to share their love of traditional Sicilian choral music. 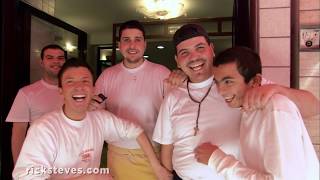