Picasso painted prolifically in Antibes in his later years, inspired by his young muse (Françoise Gilot), simple village life, and the joy of post-WWII freedom. We see his paintings in Antibes’ Picasso Museum

Before 1860, when Nice was under Italian rule, Antibes was France’s last fort before the Italian border. The French king made sure the ramparts were strong and well-defended. Today, the fort protects a priceless collection of Picassos.

In 1946, 65-year-old Pablo Picasso was reborn. World War II was over, and Picasso could finally escape the gray skies and gray uniforms of Nazi-occupied Paris. Enjoying worldwide fame and the love of 23-year-old Françoise Gilot, Picasso moved to Antibes. He lived and worked in this castle and on this terrace. He painted like a mad man, swam in the Mediterranean in the morning, partied with friends in the evening, and painted again late into the night.

Ever-restless, Picasso had finally found his Garden of Eden…his joy of life and he painted it. In his Joie de Vivre we see his flower-child — Françoise. She kicks up her heels and dances across a Riviera beach. Flute-playing satyrs, centaurs, and fauns announce the newfound freedom of a newly-liberated France and a newly-liberated Picasso.

After decades in the city, Picasso rediscovered the joys of village life. Shopping at the Antibes market, he’d return home and turn groceries into masterpieces. With his distinct Cubist style, he captured sunbathers…and munching locals. He was fascinated with the simple life of fishermen. Picasso painted a pagan paradise, where civilized people could let their hair down and indulge in simple, animal pleasures. 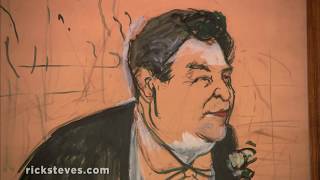 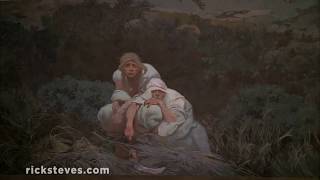