Prehistoric and Medieval Ireland on the Dingle Peninsula
Share

Dingle Peninsula is dotted with ancient and medieval sites — forts, stone huts, and chapels. During hard times, farmers made soil out of sand to grow potatoes, but the famine still came. We visit Blasket Island, home of the last traditional Irish community until 1953.

Tim Collins, Dingle’s retired police chief, is an amateur archeologist who takes my tour groups around when they’re in town. Today, his group is really small…just me and Andy. On this trip around the peninsula Andy is learning some history the way I like to — from a local.

Dingle peninsula is like an open-air museum. It’s dotted with more than 2,000 monuments dating back to 4000 BC. Some of Ireland’s ancient and complex history can be sorted out by visiting these sites.

Tim: This is actually known as Dunbeg promontory fort. It’s one of about 2,200 archeological monuments we have on the Dingle peninsula. This site was built by the early settlers about 500 BC, that is the date for it. It has been excavated about 25 years ago, because half of it has actually fallen into the sea due to coastal erosion. I suppose there’s no part in Ireland that has got so many archeological monuments intact as you’ve got in the Dingle Peninsula. And probably that’s due to fact that this area has never been industrialized. Thankfully so far.

This remote peninsula was also busy during early Christian times. The Gallarus Oratory was a church built without mortar about 1,200 years ago. Shaped like an upturned boat, its finely fitted walls — stone without mortar — still keep out the rain.

In the depths of the Dark Ages, monks fled the chaos of Continental Europe. They sailed to the far fringes of the known world — settling in places like this — Dingle Peninsula. Living in monastic communities of stone igloo-type huts, they kept literacy alive for western civilization. In fact, Charlemagne, who ruled much of Europe in the year 800, imported monks from Ireland to be his scribes.

Tim: This was the typical lay-out of these early Christian monasteries — several stone type igloos and a church within a fortified wall. The inner wall divided the community into two sections — one for work and one for worship.

This monument now actually is a thousand years older than what we’ve been already looking at — a slab-cross erected by the Celts in 500 BC, red sandstone. They decorated the stone with these Celtic motifs, or these concentric circles which run through the front of the stone, and that remained until the sixth century when the Christians came and Christianized the cross by superimposing this Greek cross on the upper part of the old Celt monument. Thus, displaying the two traditions on the one slab cross, the Celtic and the Christian.

When the English came in the 12th century, they replaced the old monastic settlements like the one we just saw with their own churches in an attempt to centralize their control. During that era, this ruined church was a center of worship for the peninsula.

And here on Dingle peninsula the soil itself reveals the struggles of the Irish people.

Tim: Now, in prehistory the soil here was worthless, very barren. This soil here we’re looking at was actually made by the hard work and endeavors of the peasants that actually had to reclaim this barren land by going to the beach and drawing up seaweed and sand to augment the very barren soil that was there to grow their potatoes and their crops.
Rick: So, there’s seaweed and sand in this?
Tim: Seaweed and sand mixture, and some peat, which has developed into clay over the centuries.

Patch by patch, they created fertile fields for potatoes, climbing ever higher up the hillside. In 1845 they planted. But a blight swept across Ireland and nothing grew…the potatoes rotted in the ground.

For the next four years Ireland starved. The village of Dunquin with its many abandoned homes is a reminder that Ireland’s population was decimated by the great potato famine.

Just off the shore is Great Blasket Island. The story of its tiny community — just a ghost town today — gives an insight to the soul of Ireland. Taking a boat ride there is a highlight for anyone interested in traditional Irish culture.

And, back in Dingle, our family’s doing just that. Weather permitting, the Peig Sayers zips to Blasket Island in 40 minutes — unless Fungie comes out to play.

Rick: There he is, right there!

Even in today’s drizzle and choppy seas, the boat ride to Great Blasket Island is both exhilarating and scenic.

The landing is as tenuous today as it was for the original islanders. Just a little nook along its rocky coastline provides enough protection to land a small boat.

Wandering through the scant remains of their homes, we try to imagine the life these hardy islanders led.

This village was about the only one in Ireland to escape the famine because they harvested the sea rather than potatoes. Forming the most traditional Irish community of the 20th century — the Blasket Islanders became a symbol of antique Gaelic culture.

The island’s population peaked at 160, then dwindled until the government moved the last handful of residents to the mainland in 1953.

Each family had a cow, a few sheep, and a tiny garden. There was no priest, no doctor…and no pub. They heated their humble homes with peat cut from the high ridge and fed their families with fish.

The Blasket Islanders may be gone but their story, which in many ways echoes the story of Ireland as a whole, lives on. 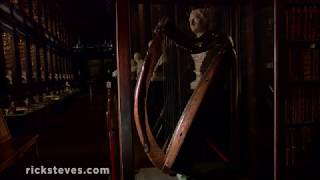