When Luther entered the monastery, the Renaissance in Italy (starring Michelangelo and Leonardo) was celebrating humanism — the power of the people. With the help of Gutenberg’s printing press to disseminate ideas, everything was being questioned, including the Church.

In 1505 — the same year that Luther entered the monastery in Germany — hundreds of miles to the south, in Italy, Florence was celebrating the unveiling of a brand new symbol of the city, Michelangelo’s David. David also symbolized a new age, known as the Renaissance. Looking at the confidence in David’s face as he sizes up the giant he’s about to kill, the Florentines saw optimism, the goodness of creation, and the power of the individual to affect change…in a word, Humanism.

That's why the Renaissance was about more than just pretty art: It was a revolution of ideas. The Renaissance — which means "rebirth" — sought to rediscover Western civilization's ancient Greek and Roman roots. And with Humanism…the importance of the individual skyrocketed.

This "rebirth" opened up a whole new world of possibility — in science, politics, and economics. Religion was also seen in a new light. Life was suddenly about more than preparing for the hereafter. Artists saw themselves as an extension of God’s creative powers. Both in subject matter — like beautiful nude bodies — and in theme, humanists embraced the full human experience. Rather than just bowing down in church, Renaissance artists and thinkers sought to express the glory of humanity — and in doing so, to glorify God.

Other big changes were also percolating. Imagine Europe’s “class of 1500”: Great thinkers like Leonardo da Vinci embraced science and studied nature. Gutenberg's printing press had made books affordable, allowing knowledge to spread rapidly. Michelangelo was chipping away at his early masterpieces, Machiavelli was shaping modern politics, Columbus stumbled upon the Americas, Copernicus was putting the earth in its place. And Martin Luther — among other courageous reformers — would soon be questioning fifteen hundred years of Church tradition.

With all this progress, two important movements in European history were about to intersect — the Renaissance and the coming Protestant Reformation. But first Luther had to address his inner turmoil. And a life-changing trip helped make that happen. 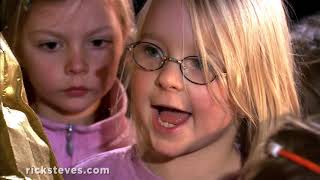