The nomadic Roma people (also called "gypsies") — known for being musicians, thieves, and metalworkers — have spread throughout Europe. Many have settled in Romania as metalworkers. We meet a local Roma to learn more.

And the cultural heritage of Romania is many-faceted. Appreciating the diversity of the 20 million people who make up this country enriches your experience. The faces — as varied and beautiful as the land itself — tell the story.

Of Romania’s many people, one group in particular has struggled to fit in: the Roma.

Also known as “Gypsies,” the Roma originated in India. They were nomads who migrated over the centuries throughout eastern Europe and gained a reputation as musicians, thieves, and metalworkers.

Romania has Europe’s largest Roma population. They’ve had to abandon their nomadic ways and face the challenge of settling down. The classic Roma image is poor people in shantytowns.

But most Roma live side-by-side with their Romanian neighbors, more or less fitting into mainstream society.

And many Roma carry on the traditional craft of metalworking. We’ve been invited in to learn more.

Rick: So how many years has your family been making copper?
Emil: Four hundred and fifty years ago.
Rick: Many generations!
Emil: Yeah, many generations. Six, maybe seven generations.
Rick: Six or seven —
Emil: And this job is…
Rick: Your father, his father —
Emil: Yeah — my grandfather, my grand-grandfather…
Rick: Right here!
Emil: Yeah.
Rick: I love your hat! Can I see your hat?
Emil: Yeah, sure!
Rick: So, this is a Roma hat.
Emil: Yeah, it’s [a] Roma hat.
Rick: Do you like to be called “Roma” or “Gypsy”?
Emil: Uh, “Roma.”
Rick: Roma. What is important to the Roma people?
Emil: For Roma people it’s important — it’s important: family, respect life, my people — art, music, language — pure language…
Rick: So you speak a Roma language.
Emil: Yeah. Yeah.
Rick: So, today, for the Roma community, what’s the challenge?
Emil: Living [in] modern times, but [at the] same time, like, keep the traditions. 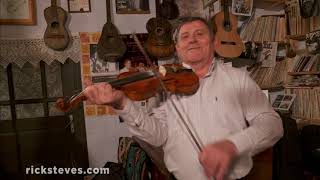