Ostia Antica rivals Pompeii, and it’s closer to Rome. Touring the museum and excavations with a guide, we learn about Roman life from the mosaics, statuary, theater, and stony remnants of the houses, apartments, shops, food bars, and public toilets and baths.

We’re meeting up with Francesca again, riding the subway out to Ostia Antica, to explore what’s left of ancient Rome’s mighty port.

The ruins of Ostia rival the more famous ruins of Pompeii. And while Pompeii is three hours away, Ostia is just a half-hour train ride from downtown Rome.

Two thousand years ago, this was a working port town. Wandering around, you can imagine the bustle and complexity of a once-thriving port of 60,000 people — warehouses, apartment flats, mansions, shopping arcades…all laid out in a typically Roman grid of streets.

Located where the Tiber River meets the sea, Ostia was founded in the fourth century before Christ. It served as a naval base, protecting Rome from any invasion by river. It was also an administrative and warehousing center, keeping more than a million Romans fed and in sandals.

But eventually things went downhill for Ostia. Rome fell. The river changed course, the port silted up and was abandoned — the entire place became a malaria-infested swamp. And Ostia was forgotten.

The mud that buried Ostia actually protected it from the ravages of time — including stone-scavenging medieval peasants. And, thanks to extensive — and ongoing — excavations, there’s lots to see.

This fine mosaic decorated the Baths of Neptune. At the bottom of the pool, Neptune rides four horses through the sea. Apart from the cupid riding the dolphin, the sea looks frightening — which, to those ancients, it was.

The Square of the Guilds, lined with offices of ship owners and traders, was the bustling center of Rome’s import-export industry. Mosaics on the sidewalk advertise services offered by various shops — with symbols for sailors and merchants who were either illiterate or couldn’t read Latin.

Shippers showed off fine vessels. This lighthouse was the sign of the great Egyptian city of Alexandria. Grain containers are reminders that grain was the major import of Ostia.

Francesca: Rome imported most of what it consumed. These big jars contained oil, wine, and grain that came from all over the Mediterranean and was stored here, and then shipped off to Rome. This is the mill. Ostia was famous for the quality of its bread. They would put sticks through these holes and then a donkey or human would push them around.
Rick: OK, so you’d pour it, you’d pour the grain in here, grind it up…
Francesca: Yes…
Rick: …flour comes out the bottom!
Francesca: Yes.
Rick: That’s stone ground, I’d say.
Francesca: Is a bit, really.
Rick: I love to imagine how people must have lived here.
Francesca: Yes, in apartments that can be easily up to five stories high. They had no kitchens, no plumbing, and no heating, so they used these apartments like tents at a camping site just to sleep.
Rick: No kitchens?
Francesca: No kitchens. So even to eat they would have to go to a fast food or a cafeteria. Most of the time it was just across the street.
Rick: So, you’d just step across the street to the corner diner?
Francesca: Yes.
Rick: Two thousand years ago, this was the neighborhood bar.
Francesca: Yes, like a cafeteria or a fast-food place.
Rick: Amazing.
Francesca: You would come up to the counter and maybe order something to go. Maybe you might see some food or some drinks on display here, or if you had time you would come inside, and you could have something sitting down. And here probably they had a display of the food, or maybe the cups and the plates. And then there is a pictorial menu that shows us what was offered. So we have food, we have drinks, and we have music.
Rick: So, music, like, “Tuesday night, we got live music.” Out in the courtyard.
Francesca: Yes, why not! As you can see, public restrooms are really public. And quite advanced; they had running water coming through.
Rick: So, there’s a stream going all the time, constantly flushing.
Francesca: Yes, constantly flushing, so constantly clean. Imagine frescoes on the walls, and even revolving doors at the entrance.
Rick: It’s so easy to underestimate how advanced Rome was.
Francesca: That’s really true.

Ostia’s delightful little museum helps bring life to these ruins. These fine statues — tangled wrestlers, kissing cupids, playful gods — adorned the courtyards of wealthy Ostia families. Many of the statues are second- and third-century Roman copies inspired by famous but now lost Greek originals. These portrait busts are of real people — like those you’d meet on the streets right here, 1,800 years ago.

One thing Roman artists did well was carve realistic busts. It was their forte because Roman religion revered ancestors — the man of the house (and his father and grandfather). That’s why statues of dad and grandpa were often found in the corner of any proper house. Also, with the emperor considered a god, you’d find his bust in classrooms, at the post office, and all over town. 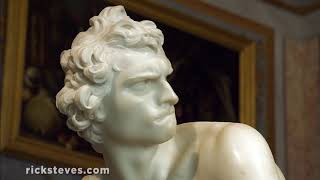