El Escorial is a vast palace packed with ghosts of the Inquisition, tombs of Spanish royals, and a dazzling library. It was from here that the Spanish king led the Counter-Reformation.

We’re side tripping — a short drive into the hills from Madrid — to San Lorenzo de El Escorial.

The town has charm…but everybody visits for this: its sprawling palace.

In the mid-1500s, King Phillip II needed a suitably grand palace to establish his family dynasty — the Spanish branch of the Habsburgs. He also needed a headquarters from which to run a strong centralized Spanish state.

Phillip ruled his huge empire — which stretched from Mexico to Manila — from here. El Escorial was built during the Reformation, a time when Catholic Spain was defending the Church against Protestant “heretics.” The enigmatic, introverted, and extremely Catholic King Philip II directed the Counter Reformation from this spot. Today, it’s packed with history and art — offering an evocative trip back to Spain’s most fascinating age.

El Escorial was more than an impressive palace for a divine monarch. It was a grand mausoleum for Spain’s royal family, it was a monastery to provide constant prayer for the king’s soul, and it was a religious school designed to teach and embrace humanism in a way that fit the Catholic faith.

King Phillip built in austerity: plain white walls and bare-bones chandeliers. His simple bed — with a mattress that’s not even queen-sized — came with a view…of the high altar in the basilica just next door.

The basilica — the architectural and spiritual heart of the complex — is dedicated to the martyr St. Laurence. The altar features a painting of the flame-engulfed grill with St. Laurence meeting his fiery death.

Downstairs, the Royal Pantheon is the gilded resting place of four centuries of Spanish kings and queens. There is a strict filing system: The first and greatest, Charles V and his queen, flank the altar on the top shelf. Their son, Philip II, rests below Charles and opposite his wife…and so on. Because kings might have married more than once, to make it here, a woman needed to be both queen and mother of a king.

The immense Library shows that knowledge was a priority for the Spanish royalty. The ceiling celebrates the seven classical disciplines with a burst of color. The elaborate model — constructed after the age of Copernicus — insists on proving that the solar system revolves unmistakably around the earth.

As you leave, a plaque above the door warns you’ll be excommunicated if you take a book without checking it out. Who needs late fees when you hold the keys to eternal damnation? 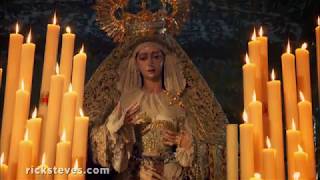