The Swiss village of Gimmelwald provides an intimate look at traditional lifestyles, including cheese making and using an alphorn.

Remote towns may be beyond the reach of your car, but all are accessible by various lifts. One of my favorites is the idyllic village of Gimmelwald.

The village — established in the Middle Ages, precariously on the edge of a cliff — was one of the poorest places in Switzerland. Gimmelwald works together like a big family — in fact, most of the hundred or so residents here share one of two last names: "Von Allmen" or "Feuz."

My friend Olle, long the village schoolteacher, enjoys showing me around. This is the oldest house, from 1658. And the woodwork is generally unpainted, just bleached in the sun; originally hay up top and cows below. For generations, families have lovingly tended their vegetable gardens. They still are relied on to put food on the table — and this one comes with an artistic side.

Relying on their traditional ways, farmers here make ends meet only with help from Swiss government subsidies. They supplement that by working the ski lifts in the winter. Modern tourism has contributed to the local economy as well. Pension Gimmelwald's terrace restaurant is filled with happy hikers at dinnertime — enthused by the memories they earned with today's hike.

I've been coming to Gimmelwald all my life, and it just never gets old. With the world changing as fast as it is, I find it refreshing to know that there are places like this that still embrace their traditions.

Dairy is the traditional industry here. Collecting grass to get their cows through the winter on these steep slopes is labor intensive.

Each family fills silos with enough to feed a dozen or so cows.

But we're here in the summer, and the cows are in the high alp enjoying a diet of fresh grass and flowers. From their milk, some of the most prized cheese in the world is still made in the traditional way.

We're joining a small tour group organized by the village tourist office. Of the countless visitors in this valley, these travelers took the initiative to enjoy this intimate peek at local culture in action. Once the milk is heated to just the right temperature, the cheese maker, using his teeth as well as his hands, masterfully scoops about 10 kilos of curds from the bottom of the cauldron. He then plops the sopping cheesecloth into a circular mold. It's quickly pressed to remove as much of the liquid, or "whey," as possible. As the moisture is removed and the aging process begins, a wheel of wet curds becomes a wheel of alp cheese, frequently brushed with brine and stored flat on shelves in a shed like this one for up to two years.

In the high country, I also enjoy a chance to hear traditional music — and up here, along with yodeling, that means the long, legato tones of the alphorn.

The alphorn has a range of nearly three octaves. But with no valves, it's limited to the same notes as a bugle. Used throughout the Alps, this horn has played a role in this culture for 500 years: to call cows from pasture to the barn for milking, as a way for herdsmen in the high meadows to communicate with people in the valley below, and even as a call to prayer through remote valleys. 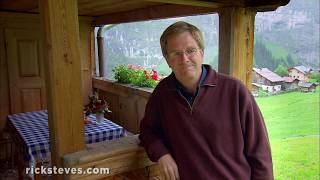