The Biblical Story of Easter, as Told in Great Art
Share

We learn how artists throughout time have depicted the Easter story in art: Jesus’ arrival in Jerusalem, the Last Supper, Jesus’ betrayal and arrest at Gethsemane, his trial, his journey — mocked by crowds — to the cross, the crucifixion, deposition, resurrection, and ascension.

While Christmas celebrates the birth of Jesus, Easter remembers the central Christian event — his suffering, crucifixion, and resurrection. For Christians, it’s the story of how Christ died to save humankind from sin, and bring the gift of salvation.

For nearly 2,000 years, those events described in the Bible have been expressed through great European art. The story — called the “Passion” — begins a week before Easter Sunday, as Jesus and his followers make a triumphal entry into Jerusalem. It’s called “Palm Sunday” because, as he approached the city, a huge crowd welcomed him by waving palm fronds and shouting joyfully, “Hosanna, Hosanna in the highest!”

But the chief priests and Jewish elders felt threatened by Jesus, so they plotted to arrest him. For 30 pieces of silver, one of Jesus’ 12 apostles, Judas, agreed to betray him.

Eating his Last Supper with his disciples, Jesus said, “One of you will betray me.” Anxiously, they asked, “Lord, is it I?”

After the meal, Jesus and his disciples went to the garden of Gethsemane. He asked his disciples to pray with him in his time of need, but they fell asleep. A troubled Jesus asked God if he could escape his fate. He said “Father, if you are willing, take this cup from me; yet not my will, but yours be done.”

As Jesus prayed, Judas arrived with a group of armed men and, as was arranged, identified Jesus with a kiss. Jesus was arrested and the apostles, afraid for their lives, fled.

Jesus was bound, handed over to the Roman governor, Pontius Pilate, and charged with treason. Pilate saw no reason to convict Jesus. But the crowd shouted, “Crucify him!” Pilate literally washed his hands of the problem and turned Jesus over to the mob.

The crowd spit on him and whipped him. They taunted him, mockingly dressed him in a royal robe, and crowned him with thorns. Ridiculing him, the people said, “Hail, King of the Jews.”

Jesus then was made to carry his own cross up the hill of Golgotha, the place of execution in Jerusalem.

He was stripped; his hands and feet were nailed to the cross. The initials above his head stood for, “Jesus of Nazareth, King of the Jews.” Dying and in despair, Jesus cried out, “My God, my God, why have you forsaken me?”

Then, breathing his last, he said, “Father, into your hands I commit my spirit.”

As evening approached, Jesus’ grieving friends gently lowered his body down from the cross. Wrapping him in a shroud of linen, they placed his body in a tomb carved out of rock and protected the entrance with a large stone.

On Sunday morning Mary Magdalene and the women who came to anoint his body went to the tomb and saw the stone was rolled away. An angel told them not to worry and that Jesus had risen.

Bewildered and frightened, the women fled. Suddenly Jesus appeared and said, “Do not be afraid.” He instructed them to tell the apostles that he was alive. When the apostles saw Jesus, they couldn’t believe it was him. To prove it was actually him, he encouraged them to touch his wounds, and they broke bread together.

After 40 days Jesus blessed his followers and told them to go out and preach the gospel — the good news of his resurrection. Christians believe he then ascended to heaven before their very eyes.

This remarkable story has helped shape Western history for 2,000 years. 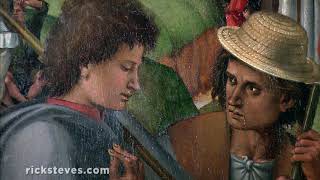 The Christmas Story, as Told in Great Art

Montenegro: The Black Mountain of the Former Yugoslavia