The Habsburg family, which ruled the Habsburg Empire for six centuries from Vienna, believed they were divinely ordained to rule, until World War I ended that notion. Today their luxurious apartments and rich treasury are open to the public.

For centuries Vienna was ruled by the Habsburg family. They had two luxurious palaces in Vienna. The Schonnbrunn palace, with its expansive grounds standing at the edge of town, was their summer residence. Their main palace, the Hofburg, dominates the town center. This imposing and sprawling complex grew with the family empire from the 13th century until just before WWI, when this last "new wing" opened.

While the last Habsburg checked out in 1918, the palace is still plenty busy. It has the offices of the Austrian president and it’s home to hundreds of government workers, the Spanish Riding School, and the Vienna Boys' Choir. And the palace itself welcomes the public.

The lavish Imperial Apartments seem designed to give their royal residents grandeur fit for a god. After all, in the age of divine monarchs, kings and emperors like the Habsburgs claimed God himself ordained them to rule with unquestioned authority. The Habsburgs were one of a handful of royal families who ruled nearly all of Europe until WWI.

The walls between the rooms are wide enough to hide servants' corridors. The big, ornate stoves, which servants fed from behind, heated the rooms. The decor is splendid Baroque — the preferred style of divine monarchs as it served as a kind of propaganda to sell the old regime notion that some were born to rule, and others were born to be ruled.

When the emperor and his extended family sat down to dinner, they ate here. This is the more casual table setting — with just your basic silverware. For more formal state dinners they brought out the golden ware. Each drink came with a proper glass… and spittoons always go on the left.

Six centuries of Habsburgs ruled from here including Maria Theresa in the late 1700s. She was famous for having sixteen children and cleverly marrying many of them into Europe’s various royal families around Europe in order to expand her empire.

Today's palace is furnished as it was in the 1800's from the age of Maria's great-great-grandson, Emperor Franz Josef. He ruled for 68 years and was the embodiment of the Habsburg Empire in its final decades. Franz Josef had a stern upbringing that instilled in him a powerful sense of duty. This was Franz Josef in 1915, when he was 85 years old.

Wearing his uniform to the very end, he never understood what a dinosaur his monarchy was becoming, and he didn’t think it was strange that so few of his subjects actually spoke German. Still every citizen had the right to meet with the emperor here in the Audience Room. Famously energetic and dedicated to duty, Franz Josef stood at this tall table to meet with commoners. They’d come ask him a favor or tell him thanks for something. Standing kept things moving.

The emperor presided here over cabinet meetings in this room. He ruled the Austro-Hungarian Empire, so Hungarians sat at these meetings. The paintings on the wall show the military defeat of a popular Hungarian uprising… not too subtle.

Franz Josef nurtured an image of being Spartan and a very hard worker — this is his famous no-frills iron bed and portable washstand. While he had a typical emperor's share of mistresses, his dresser was always well-stocked with portraits of his wife, the Empress Elisabeth… or Sisi.

Elisabeth, Franz Josef's mysterious, narcissistic, and beautiful wife, is in vogue these days. In the palace, you'll learn of her fairy tale existence — her escapes, dieting mania, and chocolate bills. Sisi's hard-earned tiny waist was 21 inches around at age 50… after giving birth to 4 children. Her main goals in life seem to have been preserving her beautiful empress image, maintaining her Barbie Doll figure, and tending to her cascading hair.

Here in her bedroom, servants worked two hours a day on Sisi's famous hair. She'd exercise on this. Her bathroom was equipped with a huge tub — the finest anywhere — which rested on the first linoleum floor in Vienna… installed in 1888.

In spite of severe dieting and fanatic exercise, age took its toll. After turning 30, she allowed no more portraits and was seen in public only behind a gentle fan. In 1898, while visiting Geneva, in Switzerland, Empress Elizabeth was assassinated by an Italian anarchist. Sisi has often been compared with Princess Diana because of her beauty, her bittersweet life, and her tragic death.

When you visit Vienna, it's easy to get caught up in the growing legend of Empress Elizabeth.

The Habsburgs ruled as Holy Roman Emperors. While historians joke their domain was neither holy nor Roman, they did have some fancy jewels.

The Imperial Treasury shows off the best jewels on the Continent. Visitors reflect on the glitter of 20 rooms filled with the precious paraphernalia designed to help keep one royal family ruling a good part of Europe.

This 500-year-old unicorn horn (or perhaps the tusk of a narwhal) was considered very powerful in the Middle Ages. Possessed by the Habsburg Emperor — a divine monarch — it gave its owner the grace of God… something rulers still seek today.

The collection's highlight is the 10th-century crown of the Holy Roman Emperor. The symbolism indicates that the emperor was both holy and Roman. The jeweled arch represents the parade helmet of ancient Roman emperors whose successors the Habsburgs claimed to be. The cross says the emperor ruled as Christ's representative on earth. King Solomon's portrait is Old Testament proof that kings can be wise and good. King David is similar proof that they can be just. The crown's eight sides represent the celestial city of Jerusalem's eight gates. The precious stones on the front panel symbolize the 12 apostles.

The 11th-century Imperial Cross preceded the emperor in ceremonies. Encrusted with jewels, it carried what was believed to be a substantial chunk of the cross. Through the centuries, the Holy Roman Emperors actually carried this into battle. You can see bits of the so called "true cross" anywhere, but this is a prime piece — with an actual nail hole.

Adjacent to the palace, below a church is more Habsburg history.

While the Habsburgs have been out of power since the end of WWI, they maintain a hold on the Austrian spirit — as you feel when you visit their tombs. But visiting the imperial remains is not as easy as you might imagine. These early organ donors — about 150 Habsburgs in all — left their hearts under a church near the palace, their entrails under the Cathedral, and the rest of their bodies here in the Kaisergruft or Emperors' crypt.

The ornate double coffin of Maria Theresa and her husband, Franz I, is festooned with Habsburg regalia… and surrounded by the tombs of their many children.

The royal tombs are an evocative mixture of art and symbols of that monarch's reign. How they wanted to be remembered is reflected in the tombs they often helped design. Franz Josef's is an appropriately austere military tomb. His wife, Empress Elisabeth or Sisi always seems to get the most flowers.

While it's fun to chase down all these royal body parts, remember that the real legacy of the Habsburgs is the magnificence of their city. Step outside. Look up. Appreciate the ornate skyline of Vienna.

Vienna, Capital of the Habsburgs 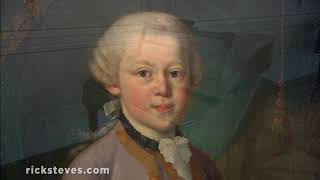