The Roman Villa of Casale: Ancient Mosaics in Sicily
Share

In the middle of Sicily, 1,700 years ago, a Roman senator — probably made rich by trading in exotic animals — built a magnificent palace. While destroyed by a landslide, its exquisite mosaic floors survive, giving an intimate peak at his wild beasts and extravagant lifestyle.

The Villa Romana del Casale, near the town of Piazza Armerina, was tucked away in a remote Sicilian valley, about midway between the city of Rome, and Africa.

This was the mansion of a wealthy Roman senator who traded in exotic animals. That was a big business back when Rome so creatively entertained its masses with arenas filled with wild beasts and gladiators.

In about the year AD 300, the senator built this lavish country escape right here in the middle of Sicily. Its splendor survives in some of the finest Roman mosaics anywhere. Each room had a theme, like this dining room with its scenes of Romans hunting game.

This room features cupids fishing. Far from the sea, only the very wealthy could afford seafood. Serving fish for dinner was showing off. This scene is as much an extravagant menu as a piece of art.

While today, tourists with cameras stroll on elevated walkways, imagine this place with big shots in togas wandering past fountains down colonnaded halls.

These mosaics, made of dozens of different kinds of multicolored marble and glass chips, give us a colorful peek at the lifestyle of Rome’s elite. The expressive and realistic faces are a vivid reminder that it took a lot of people — real people — to run the empire.

The Corridor of the Great Hunt is 200 feet long. It shows off the merchant’s animal importing business, and it illustrates Rome’s fascination with wild animals. Exotic beasts were caught and transported alive by ship from distant lands. They were destined to battle each other, and slaves, to the delight of urbanites packing big-city Roman arenas. The details are instructive, entertaining, and flat-out beautiful.

Any top-end villa came with baths and a gym. These women athletes are demonstrating Olympic events: discus throwing, racing, and some kind of ball game. For the winner? A victory palm and a crown of roses. And I thought bikinis were an invention of the 1950s.

This countryside palace was built to impress, and today — 1,700 years later, with little more than its lavishly decorated floors surviving — it still does. 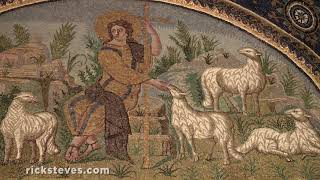 Ravenna’s Mosaics at a Byzantine Mausoleum and Modern-Day Workshop