To escape persecution, early Christians lived in underground cities. A Turkish guide takes us through Kaymaklı, where a network of tunnels leads to kitchens and cramped living spaces, where communities lived for months at a time.

Back on the ground, the terrain invites exploration. People have carved communities into these formations for thousands of years. While many of these evocative caves are abandoned, many cave settlements have grown into thriving towns, whose main industry is clearly tourism.

For extra guidance, we’re joined by my friend and fellow tour guide Lale Surmen Aran. For years, Lale’s led our bus tour groups around Turkey, and for this itinerary she’s joining us.

And, to actually see what Lale’s talking about, we’re descending into Kaymaklı, a completely underground city dug out of the rock.

Much of Kaymaklı was originally dug in Hittite times — over 1000 years before Christ. Later, this underground world provided an almost ready-made refuge. Through the centuries, when invading armies passed through the area, entire communities lived down here for months at a stretch. In ancient times, Christians were persecuted and actually did go, literally, underground.

Tourists are free to explore the networks of streets and plazas. You’ll find kitchens, cramped living spaces, massive roll-away-the-stone doors, and ingenious ventilation shafts to bring fresh air to the many underground levels.

They could have made these tunnels bigger, but this was part of the plan — it certainly made any invader vulnerable.

And, to conserve oxygen, candlelight was kept to a minimum. It must have been a long, dark wait. But for us, it’s back to fresh air and sunshine. We’re on our way again!

As time went on, sprawling communities, still digging caves for homes, inhabited entire valleys like Zelve. Around the 10th century, Zelve was one of scores of similar cave communities here in Cappadocia.

Cleverly, they wrung a livelihood out of this parched land. Caves served as ancient condominiums with holes dug out as cooking pits. In addition to living spaces, they also were equipped with natural pantries — cubby holes carved out for storage of food and wine. Big, animal-powered stone wheels ground grain.

People ingeniously used whatever nature offered them. Pigeon droppings were collected, providing valuable fertilizer to assure a good harvest in the valley below.

Imagine this place centuries ago: It was a thriving community — thousands of people. Families everywhere — old people, little kids running up and down these stairs, borrowing salt from the neighbors… and people lived here till the 1950s. 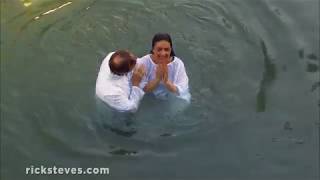 The Sea of Galilee: Scene of Many Biblical Sights 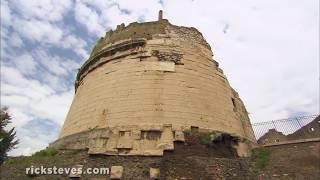