Venice: Born in Mud, Cisterns for Water, and the First Jewish Ghetto
Share

Venice and water are inseparable. For centuries, the city got its fresh water from rainwater collected in cisterns in town squares. Its saltwater lagoon routinely floods the city. Emigrants came to the city in waves: from Croatians to Greeks to Jews, who were isolated in the Ghetto.

Over the centuries, the haphazard community coalesced. Because nobles originally settled on their own little islands, you'll find palaces (and delightful squares) scattered all over. Eventually, island communities decided to join, or literally "bridge," with others. Building bridges required shoring up the canals. Later, paved canalside walks appeared.

While plenty wet, Venice had no natural source of drinking water. But a thousand years ago, residents devised a clever way of using town squares as cisterns.

Rainwater would flow into these stone grills, and then through a sand filtering system, and on to the main well. Only after it devised this safe local source of drinking water was Venice's population able to grow.

Hundreds of these rain-collection systems provided drinking water right up until 1884, when an aqueduct was opened, bringing water in from nearby mountains.

The city, with its pilings-in-mud foundation, is slowly sinking. Many ground floors have been vacated. Pondering this church's flooded crypt, you'll appreciate the ongoing struggle. While accelerated by a rising sea level due to global climate change, this has been a challenge for centuries.

With the right combination of high tide, wind, and barometric pressure, the city floods. Locals are used to it. They put up elevated walkways, pull on their rubber boots, and life goes on.

And the population of Venice is sinking, too. With the high cost of living in the lagoon, and the allure of a faster-paced world on the mainland with better employment opportunities, young people are leaving. More and more businesses are now run by immigrants, who commute in from the mainland.

But, in its prime, people clamored to live in Venice. In the Middle Ages, merchant communities from all over the Mediterranean world established a presence here, in what was the trading capital of Europe.

This [the Scuola Dalmata di San Giorgio] was where the Dalmatian community from Croatia met to worship and preserve their culture. It was one of a several such community centers for various ethnic groups — all part of the cosmopolitan mix of Venice.

The exquisite wood-paneled meeting room, decorated with paintings by Carpaccio from about the year 1500, is one of the finest Renaissance interiors in Venice.

Scenes throughout tell story of St. George, the Dalmatians' patron saint. Here, he slays a dragon and metaphorically conquers paganism. George charges forward and spears the dragon in the head, to the relief of the damsel. St. George then leads the bedraggled dragon, spear still in his head, to the pagan king and queen. Finally, the Royal couple kneels before George as he baptizes them.

The Greeks lived and worked nearby, in the shadow of their church's leaning bell tower. Stepping inside, you step into yet another culture. To this day this church [San Geiorgio dei Greci] serves that community.

Another part of Venice's diverse population was the Jewish community. And the original ghetto was here in Venice.

In medieval times, Jews — who were the moneylenders of the day — were allowed to do their business in Venice. But they were segregated here on this easy-to-isolate island, which was a former copper foundry. In fact, the term "ghetto" comes from the Venetian word for "foundry."

The island's bridges were locked up at night. As the population swelled in the 1600s, the ghetto had to expand…but it could only go up. The resulting eight-story buildings — skyscrapers in their day — survive. 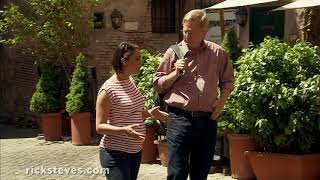