Vienna, once the capital of the huge Habsburg Empire, lost its empire when it lost World War I. With the pressure off, the laid-back Viennese enjoy the good life, eating well, and strolling the delightful old-town streets.

Vienna has been called a head without a body. For over 600 years the capital of the once-mighty Habsburg Empire, it started and lost World War I, and with it her far-flung holdings. Today, you'll find an elegant capital ruling a relatively insignificant little land-locked country — Austria, historically, culturally, and from a sightseeing point of view, Vienna is the sum of an illustrious past.

We'll explore the palace, picnic on the Danube, bake a strudel, visit an extraordinary Gothic Cathedral, chase butterflies, marvel at the crown jewels and of course, do a little waltzing.

Vienna was long the easternmost city of the West. In ancient Roman times, the city was Vindobona, on the Danube facing the Germanic Barbarians just beyond. In the Middle Ages, it was Europe's bastion against the Ottoman Turks — a kind of Christian breakwater against a rising tide of Islam. Throughout the Cold War, neutral Vienna gingerly maintained its freedom while nearly surrounded by communist and Soviet-dominated states. But now, with so many of those Eastern Bloc nations joining the EU, Vienna finds itself firmly in the middle of Europe.

The German-speaking locals call their town Wien. It's the melting-pot capital of a now-collapsed empire that once had over 50 million people. But of all those people, only about eight million were Austrian. The truly Viennese person is a second-generation Habsburg cocktail, with grandparents from the distant corners of its old empire — Hungarians, Czechs, Slovaks, Poles, Slovenes, Jews, Serbians, Romanians, Italians, and more.

After the defeat of Napoleon, Vienna hosted a huge diplomatic convention in 1815. That Congress of Vienna stabilized and shaped 19th-century Europe.

And that's the age that shaped our romantic image of the city: swirling orchestras, Eiffel-era Ferris wheels, and grand architecture.

A century later, after losing WWI and its empire, Vienna's just more laid back. Today, enjoying the fact that its super power days are over, Vienna is simply an expert at good living; and that includes perhaps Europe's finest chocolate cake — the Sacher-Torte.

Demel's café and bakery is much-loved for its cakes and pastries. This place was the emperor's choice back in the 19th century. Customers enjoy a close up look at the cooking. The famous Sacher-Torte is made-to-order for chocoholics. Apart from its apricot filling, the recipe seems pretty simple… chocolate on chocolate.

Vienna's tasty cuisine, like its old empire, is multi-national. The Wiener schnitzel or Vienna schnitzel, it should be an Italian schnitzel — it’s from Milan; the dumplings they are from Bohemia; goulash — that’s Hungarian; and the apple strudel — that's a mix of east and west.

The strudel dough — a wheat-based filo — is from the Turks (think baklava). And the apples, they're from Germany. Add sugar, cinnamon, and rum raisins. Roll it up, glaze with lemon sauce, pop in the oven and before you know it… you've got your apple strudel.

To enjoy Café Demel calorie free, savor its chocolate and marzipan window displays. They change regularly and reflect current happenings in town. This mermaid celebrates the summer — time for some fun in the sun.

And as if providing a fine venue to walk off the city's sweet temptations, a big part of Vienna is its fine parks, filled with statue-maker memories of Austria's glory days and high culture.

The enticing shopping streets of the old town have been traffic-free since the 1970s. With its elegant storefronts and lively people-watching, just taking a stroll is a delight.

History is everywhere. Even in the street musicians. This well-decorated musical gang goes back to a day when Austria's military marching bands had a more serious job to do. 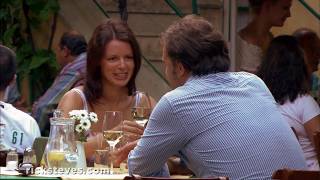 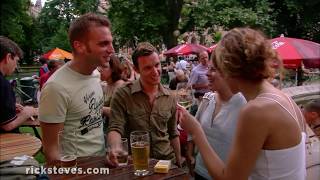