For a movable feast in Madrid, turn a pub crawl into dinner. Visit a series of tapas bars, trying the specialties at each one: gazpacho, grilled shrimp, and sautéed pigs’ ears. Olé!

For dinner in Madrid…it’s a movable feast. For maximum fun, people, and atmosphere, do the “tapa tango.” It’s a time-honored tradition of going from one bar to the next, munching, drinking, and socializing. When it comes to variety, Madrid is Spain’s tapas capital. Grab a toothpick and stab something strange. While Spaniards don’t eat dinner until 9 or 10 o’clock, with a meal like this, I can eat early and still go local.

For starters we’re going for one of Madrid’s quirkiest snacks and this spot is named for it, la oreja de oro — sautéed pigs ears.

Pig’s ears are a favorite here…and Jaime is a frantic one-man show who somehow gets everything just right.

Carlos: This wine is like the house- made wine from the northwest of Spain, from Galicia.
Rick: And it’s cloudy a little bit…
Carlos: Yes, it’s a little bit cloudy, so you don’t see the poor quality.
Laughter (both)
Rick: Gracias.
Rick: So this is?
Carlos: This is pig’s ear. This is the cartilage actually. This is sautéed with a little bit of olive oil, Spanish paprika, and parsley.
Rick: And that’s actually the cartilage?
Carlos: That’s right.
Rick: Hmm, crunchy. Wow, pigs’ ears. I never thought I’d be eating actual pigs’ ears.

Just up the street, Casa Toni is run by…Toni. He’s popular for his refreshing gazpacho — the cold tomato-and-garlic soup.

At Toni’s you can have huevos con chirizo, patatas brava, mystery meats, and the house vermouth. Don’t worry about paying until you’re ready to go. Then ask for la cuenta (the bill).

Next, it’s La Casa del Abuelo — packed with seafood lovers savoring sizzling plates of tasty shrimp and prawns. I like gambas al ajillo — shrimp sautéed with garlic, and gambas a la plancha (grilled shrimp). A glass of the house red wine — right out of the keg — is incredibly cheap. The litter on the floor is normal; that’s where people traditionally toss their trash and shells.

For a sweet late-night finale, enjoy pudding-like hot chocolate and churros. Churros are the favorite local donut. Dunk and chat…recalling highlights of the day…and looking forward to tomorrow.

Madrid and Its Love of Ham 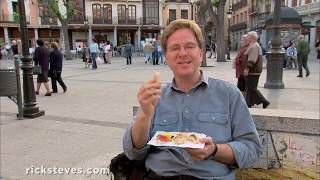 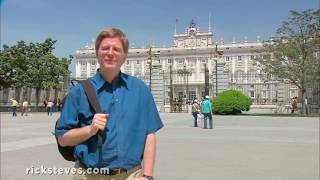