Spain’s vibrant capital has a people-friendly center, the finest town square imaginable, bars that celebrate the local love of ham, and “bull bars,” where fans of bullfighting remember great fights.

Madrid is the hub of Spain. This vibrant capital — Europe’s highest, at 2,000 feet — has a population of over four million. Most of the city is modern urban sprawl surrounding an intact, easy-to-navigate historic center. We’ll limit our visit to this old core.

Madrid is livable and fun to visit. Former parking lots are once again grand and people-friendly squares. Short posts keep cars off the sidewalks. And the fine old buildings show off their original elegance. The historic center is enjoyably covered on foot. No major sight is more than a 20-minute walk or a five-minute cab ride from Madrid’s lively main square the Puerto del Sol.

It’s a hub for the Metro, buses, city celebrations, and a busy pedestrian shopping zone.

And in the old center, it seems there’s a surprise around every corner.

My Spanish friend and fellow tour guide Carlos Galvin is joining us to share a local’s insight into Madrid’s culture and food.

Carlos is taking me to a place famous for a food Spaniards are crazy about. If Spain had a national food it would probably be jamón — that’s ham.

The eatery, called the Museum of Ham, is tastefully decorated…unless you’re a vegetarian, or a pig. This cheap and cheery stand-up bar is an assembly line of meaty treats.

Carlos: Chin Chin!
Rick: Chin Chin! Jamón!
Carlos: Jamón Serrano.
Rick: So in Spain you don’t just say "ham"?
Carlos: No, we have different kinds. We’ve got all those different kinds there. Like for example, jamón Granadino, or Bellota Extra, or Salamanca. You know, the different origins.
Rick: So, what do we have here?
Carlos: So, here we have regular jamón Serrano and we have Ibérico. This one, the pig has been killed after three months and has been eating just basic pig-food. This one has been eating acorns.
Rick: Acorns?
Carlos: Yeah, they have freedom in the fields and they’re eating acorns.
Rick: And this one is much more expensive?
Carlos: Yes, this cost $3, this would cost like $12.
Rick: Can you taste the difference?
Carlos: I can, yes. Oh yes. Here, try.
Rick: Acorns, happy pigs running free in the mountains.
Carlos: That’s right.

Plaza Mayor is a stately, traffic-free chunk of 17th-century Spain. Whether hanging out with old friends, enjoying a cup of coffee, or finding a treasure at the Sunday coin market, it’s an inviting place for people to gather.

The square is filled with emblems of Spain’s powerful past. Bronze reliefs under the lampposts show how upon this stage, much of Spanish history was played out. The square hosted bullfights. It was the scene of generations of Carnavale gaiety. And during the Inquisition, many suspected heretics were tried here and punished…in this case, publicly strangled.

Thankfully, the brutality of the Inquisition is long gone. But one brutal spectacle that survives today — anchored deep in the psyche of Spain — is the bullfight. Whether you actually go to a bullfight or not is entirely up to you. But anyone, for a quick sense of the action, can pop into one of Madrid’s many bull bars.

Aficionados gather at a bar like this after fights — or to watch one on TV. This bar is a temple to bullfighting.

Rick: If you like bull fighting, how do you justify it, with the animal? How do you excuse it?
Carlos: It’s an art. Bull fighting is an art. It’s not about the cruelty, it’s just an art, and it’s a whole aesthetic. You’re fighting against an animal that is 500 or 600 kilos and there is this guy right in front of him with this cape and sword. And he is brave enough, and he’s wearing this suit and people are so supportive of him they want to see him like doing well.
Rick: So some bullfighters are actually very popular, like heroes or popular heroes?
Carlos: Oh absolutely. Rick, look at these photographs. I think they prove that the matador does not always win. 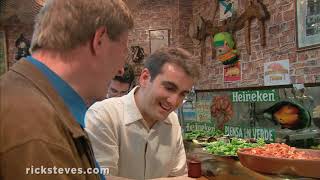 A Tapas Dinner in Madrid