We explore the marvelous 2,000-year-old ruins of the Roman town of Aphrodisias in Turkey’s Anatolia region. Named after Aphrodite, the town has temples, a gate, a long stadium, and a museum that preserves temple reliefs and other artifacts from this impressive site.

Turkey fills the Anatolian Peninsula and Anatolia is peppered with remnants of civilizations long gone. Around here, important sites are constantly being unearthed.

Aphrodisias is a relatively recent excavation. The more they dig, the more many archaeologists believe that Anatolia, rather than Mesopotamia further to the East, is the cradle of our civilization. While this site goes back much further, what we see today is ancient Roman — only about 2,000 years old. This ornate gateway gives us a sense of this impressive city's former grandeur. Judging from its stadium, the town was really into sports.

This is a proper stadium, one stadion long — that's about two football fields. Events like athletic contests, animal fights, and gladiator sports packed the house.

This is one of the things I love about traveling in Turkey. Here in the middle of Anatolia, you can find an incredible ancient stadium and it's all yours.

The adjacent museum keeps the treasures of Aphrodisias safe and protected from the elements. Aphrodisias is named for Aphrodite, the Greek goddess of love and beauty. Long before the Romans came, locals worshipped a mother goddess, who eventually morphed into the Roman goddess of fertility, Aphrodite.

The Three Graces, a scene repeated so many times throughout art history, were Aphrodite's loyal servants. Reliefs from the temple of Sebastián, line a particularly impressive wing of the museum.

This temple, which dated to the 2nd century AD, honored Augustus and the deified emperors. It was lined with fine reliefs recalling both Greek myths and the triumphs of Roman emperors. Here, Emperor Claudius triumphs over Britain. Not to be outdone, Nero has his way with Armenia.

Like nearly all major ancient sites, its museum makes a stroll through the ruins more meaningful. After seeing those fine reliefs, the grandeur of the temple of Sebastian is easier to appreciate. 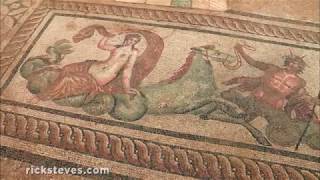