Battle of Hastings in England, 1066: A Norman Victory
Share

At the Battle of Hastings, the Normans (from France) defeated the English in 1066. The Norman leader, William the Conqueror, became King of England and made long-lasting, positive changes — centralizing the government and making Britain a stronger player on the European stage.

A scenic hour’s drive takes us to the town of Battle — where, in 1066, the Normans, invading from France, conquered the English. The town, with its medieval abbey overlooking the main square, is named for the Battle of Hastings.

For the English, a visit here is a kind of historic pilgrimage. The site is a mix of abbey architecture built on the actual battlefield. Just a vast field today, with the help of the audioguide commentary you can imagine Europe’s epic medieval battle.

Audioguide: Norman troops relentlessly hammer at what remains of the shield wall. There’s fierce and bloody hand-to-hand fighting. William is in the thick of it, and loses another horse. But more and more holes in the English defenses open up. As the English position weakens, the Normans press home their advantage.

Seven thousand soldiers died in one day — it was the most memorable date of the Middle Ages: October 14, 1066.

Across the Channel in Normandy, the nine-century-old Bayeux Tapestry tells the complicated story. Basically, the English king died without a clear heir. An Anglo Saxon noble named Harold and a French-born duke of Normandy named William both claimed the throne. William and the Normans crossed the Channel. They fought furiously on the fields of Hastings. Harold was killed — according to legend, by an arrow in the eye — and William became “William the Conqueror.”

The Battle of Hastings was a big deal. From here, the Norman invaders swept into London, and William was crowned King of England and built the Tower of London to defend his realm. The Norman conquest of England established a strong centralized government and propelled what had been an isolated island of Britain into the European mainstream. Today, nearly a thousand years later, this successful invasion is seen as a good thing by the people of England. 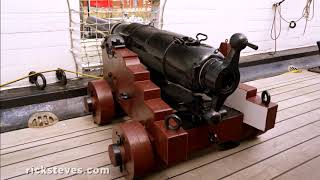