White Cliffs and Dover Castle: From Roman Britannia to the Battle of Britain
Share

The White Cliffs of Dover have served as a natural defense since the time of Roman Britannia, 2,000 years ago. Later Dover Castle was built, then a network of defensive tunnels — used as a command center by the English during the Battle of Britain.

The White Cliffs of Dover overlook the English Channel. Ever since ancient Roman times, those crossing from the Continent to Britain set their sights on these famous cliffs. If there were enemies, troops based here fended them off.

Today, the crossing between the port of Dover and France is a shipping thoroughfare. Ferries and freighters shuttle passengers and an endless stream of trucks back and forth. France is just 23 miles away. There it is, within sight on a sunny day.

Southern England sits upon a foundation of chalk, and there are miles of white cliffs towering above its beaches. The most famous are the White Cliffs of Dover. And Dover — with its bold bluffs and mighty castle — symbolizes the defense of Britain.

Sitting atop those cliffs is the impressive Dover Castle. This site was England’s primary defensive stronghold from ancient Roman until modern times. For many centuries, English troops were garrisoned within these walls — protecting the coast from any European menace.

This Roman lighthouse is a reminder that 2,000 years ago the Romans landed here and established their colony of Britannia.

The Roman fleet was based here in Dover harbor. To guide their boats safely home they burned wet wood by day — for maximum smoke — and dry wood by night — for maximum light.

Long considered the “the key to England” by potential invaders, Dover Castle provides a quick review of England’s defensive military history. Upon an earthen mound, originally part of an Iron Age fortress, is a many-layered complex with remnants from each age.

In the 12th century, the Norman king, Henry II, had this fortress built making Dover’s castle the most secure of his realm. With his troops at the ready and walls 20 feet thick, King Henry slept soundly on the top floor.

Much later — around 1800, with the threat of Napoleon — Dover’s fortifications were beefed up again. With the advent of artillery, the English dug defensive tunnels deep into the chalk.

As if frozen in time, the rooms give an intimate look at how the British foiled the attempted Nazi invasion. They used an elaborate communications center to coordinate critical decisions with what was, at the time, state-of-the-art equipment.

One command center coordinated the defense against German ships. As an island nation, control of the seas around Great Britain, for the free movement of both naval and merchant vessels, was critical. Another command center defended against the German air force. Attacking Nazi aircraft were charted on screens, and Battle of Britain defenses were plotted. From these tunnels, Winston Churchill and Allied commanders defended a battle zone nicknamed “Hellfire Corner.” The underground hospital’s operating room is a reminder that this strategic bluff was under constant fire.

Emerging from the tunnels, visitors gaze toward France. Thankfully, more than 70 years after the war, this bluff oversees not bullets and bombs, but trade and tourism.

Nürnberg and the Holy Roman Emperor 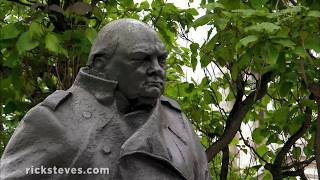